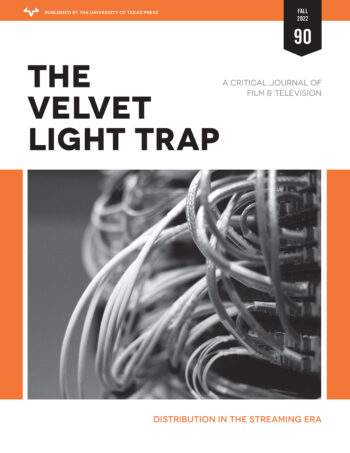 VLT is collectively edited by graduate students at the University of Wisconsin at Madison and The University of Texas at Austin, with the support of media scholars at those institutions and throughout the country. Each issue provokes debate about critical, theoretical, and historical topics relating to a particular theme.

A Tale of Two Indies: Amazon Studios and A24 in the Streaming Age
by Ryan David Briggs

Fast Forwarding the Past (on Pause): Daniel Lopatin's Memory Vague and the Hauntological Aesthetic of Vaporwave
by Jordon J. Jacobson

Keeping Up with the Kings
by Lynn Kozak

Distribution in the Streaming Era: A Scholarly Roundtable
moderated by the editors

ReFocus: The Films of Albert Brooks, edited by Christian B. Long
reviewed by Samantha Janes

Dreams of Flight: "The Great Escape" in American Film and Culture, by Dana Polan
reviewed by Josh Martin

Whitewashing the Movies: Asian Erasure and White Subjectivity in US Film Culture, by David C. Oh
reviewed by Joseph Shin

"There Would Be No Kerry Washington without Diahann Carroll": Shout-Out Culture, Sisterhood, and the Discourse of Black Womanhood
by Ashley S. Young

Golden Gays: Awards Legitimation from the Globes to GLAAD
by Ben Kruger-Robbins

Professional Widows: Contesting History with the Rock and Roll Hall of Fame
by Alyxandra Vesey

Fashion on the Red Carpet: A History of the Oscars©, Fashion, and Globalisation, by Elizabeth Castaldo Lundrén
reviewed by Alex Remington

Cinema and the Cultural Cold War: US Diplomacy and the Origins of the Asian Cinema Network, by Sangjoon Lee
reviewed by Hyun Jung Stephany Noh

Toward a Theory of Disability Documentary: Alison O'Daniel's The Tuba Thieves (2013–Present)
by Emma Ben Ayoun

Color Correction and the Look of Festival Documentary
by Chris Cagle

(Re)Writing Music History: Television, Memory, and Nostalgia in The People's History of Pop
by Leanne Weston

Dialectics without Synthesis: Japanese Film theory and Realism in a Global Frame, by Naoki Yamamoto
reviewed by Lyuwenyu Zhang

Experiments in the Cine-Olympic Cycle: Camera Technology and Operation in The Grand Olympics (1961) and White Rock (1977)
by Adam Herbert

Beyond Basketball: NBA Entertainment and the Sports League as Global Media Empire, 1982–1990
by Steven Secular

Running the Wrong Pattern: TVTV Goes to the Super Bowl
by Brett Kashmere

From the Tribune to the Tube: The Development of Sports Punditry on Cable Television
by Taylor M. Henry

How to Know When You Should Quit Your Research Project, or Why Fan Studies and Sports Studies Need Each Other
by Samantha Close

RedBottoms, Gold, and Ass: The Werk of Serena Williams on the Cover of Harper's Bazaar
by Katrina Marie Overby

The Power of Sports: Media and Spectacle in American Culture,  by Michael Serazio
reviewed by Hazem Fahmy

Articles submitted to The Velvet Light Trap are initially reviewed by the editors, who determine whether the manuscript will be sent to outside reviewers. If chosen for review, the manuscript is then evaluated in a double-blind process by at least two and usually three outside reviewers, including members of the journal’s Editorial Board, and/or other experts in relevant fields as selected by the editors. This peer review process is designed to ensure that VLT publishes only original, accurate, and timely articles that contribute new knowledge, insights or valuable perspectives to our discipline.

The editor(s) and editorial board of The Velvet Light Trap are committed to the following:

CAll for Papers: Genres and Disruption
The Velvet Light Trap, Issue 92 (to be published Fall 2023)

Special Issue Theme: Throughout the history of on-screen media, disruptions in its social, cultural, political, or economic backdrop have resulted in transformations of the types of media produced and distributed. Further, the types of stories told through media—whether delivered through film, broadcast, cable television, or online platforms—often respond to shifts that are external to entertainment industries themselves. In the contemporary landscape, factors like increased collaboration across global boundaries, changes around the relative primacy of Hollywood as central to mediated storytelling, lessened space between rapidly expanding tech companies and media makers, and generalized uncertainty following a global pandemic that dynamically changed the way people relate to the media they consume, all contribute to what narrative patterns have maintained relevance, which have fallen away, and which have emerged as more popular than ever. Amidst these shifts, media scholars continue theorizing various aspects of genre: the increased blending and bending of genres, the diminishing boundaries between reflexive, nostalgic storytelling and new generic cycles stridently responding to these changes.

For this issue, we welcome submissions that examine the ways in which genre speaks to and illuminates the role of media in the contemporary landscape. Topic areas can include, but are not limited to shifts in aesthetic sensibilities, transnational media and its impact on contemporary generic norms, and the roles of particular social, cultural, political, industrial, or economic events/dynamics on generic emphases. Further, while contemporary socio-cultural conditions may have created ruptural possibilities and actualities in genre across different forms of mediated storytelling, consideration and excavation of historical precedent and preamble for generic evolutions are also encouraged. In what ways have media makers responded to changes in industrial operating procedures through genre? Where are continuities between previous historical disruptions to entertainment industry norms visible? How are cultural and social dynamics implicated in the advent of increasingly blended genres? What can be understood about the rise and fall of particular generic cycles when audiences are considered instead of creators, and what comes to light when the reverse is contemplated? What are the implications of heightened transnational flows of influence—accelerated by the rapid adoption of streaming by even its most skeptical audiences during the COVID-19 pandemic—on the types of generic trends we see in the contemporary media landscape?

NEW FOR ISSUE 92! Open Submissions: The Velvet Light Trap is pleased to announce that, in addition to accepting submissions that relate to the above theme, it will begin accepting general submissions broadly related to the journal’s focus on critical, theoretical, and historical approaches to film and media studies. We aim to create a new space for scholarship that enhances the journal’s overall mission and work that continues the research conversations to which our themed issues have contributed. We hope that scholars inspired by the work published in our themed issues, past and present, will especially consider submitting their work. Even as our themes will continue to change each issue, we want to sustain ongoing investment in and investigation of the questions each issue of The Velvet Light Trap poses.

Submission Guidelines: Please be aware that our editorial process requires us to consider all submissions—themed and open-call—for publication in a specific issue. We do not have a rolling deadline; all submissions received by the deadline listed below will be reviewed for possible publication in Issue 92. Acceptance for publication will depend on successful peer-review as well as the capacity of the issue in question. We cannot, unfortunately, defer publication to future issues.

All submissions should be between 6,000–7,500 words (approximately 20-25 pages double- spaced), formatted in Chicago style. Please submit an electronic copy of the paper, along with a one-page abstract (no more than 100 words), both saved as Microsoft Word files. While images are not required for submissions, if your submission includes images, please ensure that they are high resolution and included as an image file separate from your Word files. Remove any identifying information so that the submission is suitable for anonymous review. The journal’s Editorial Board will referee all submissions. Send electronic manuscripts and/or any questions to thevelvetlighttrap@gmail.com.

Acceptance Policy
All advertisements and use of lists are limited to material of scholarly interest to our readers. A sample mailing piece must accompany all list rental orders. If any advertisement or mailing piece is inappropriate, we reserve the right to decline it.