Texas Studies in Literature and Language 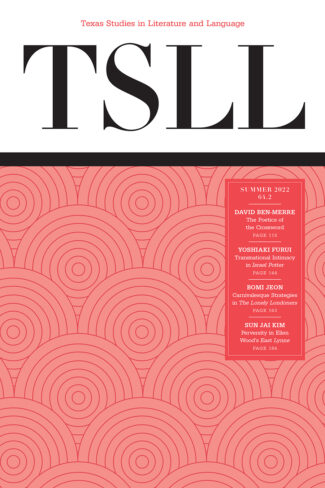 Texas Studies in Literature and Language

Texas Studies in Literature and Language is an established journal of literary criticism publishing substantial essays reflecting a variety of critical approaches and covering all periods of literary history.

“The Moon Shines Down the Stair/To See Who’s There”: The Poetics of the Crossword and the Cross Words of Poetics
by David Ben-Merre

Between Transgression and Conviviality: Everyday Urban Space and the Carnivalesque Strategies in The Lovely Londoners
by Bomi Jeon

The Surprising Success of C.R. Maturin's Bertram: A Collaboration with Scott, Byron, Kean and Murray
by Jae Young Park

Jinjitsu of the Spirit: Trublood, His Audience, and Lyrical Subversion in Ralph Ellison's Invisible Man
by Joel Peckham

The Reading Closet
by Sunggyung Jo

The Politics of the Poison Pen: Communism, Caricature, and Scapegoats in Ralph Ellison's Invisible Man
by Luke Sayers

Negotiating the Politics of Chinese Fiction: The Case of Yan Lianke's "Child"
by Haiyan Xie

"The Surface on Which You Work": Self-Alienation and the Culture of Narcissism in The Edible Woman
by Cailin Flannery Roles

A Man in Search of Family: Kinship and Decline in Michel Houellebecq's Submission
by Jay N. Shelat

The Wizard of Awe: An Introduction in Three Parts
by Domino R, Perez

"You Are a Cortez!": Robert Rodriguez's Tejano Sensibility and Restorative Kinship in the Spy Kids Series
by Jennifer Lozano

The Latinx Fantastic: Robert Rodriguez and the Power of His Speculative Storytelling
by Christopher González

From Dawn Till Dusk: El Rey Network and the Evolution of Cable Television in the 2010s
by Alisa Perren

Shakespeare the Formalist: Reading and Rewriting John Marston in the Poets' War
by Meghan C. Andrews

A Schoolhouse of Their Own: Economic Erotics in The Children's Hour
by Margaret Speer

Lautrémont, Anarchism and the Origins of the Avant-Garde
by Neil Nehring

Texas Studies in Literature and Language invites essays in all areas and eras of literary studies and on American, British, and world literature. Please submit manuscripts of 8,000–10,000 words, inclusive of notes and works cited, in the most recent version of Word and MLA format (TSLL uses the MLA Handbook, 9th edition). Submissions must be double-spaced in Courier font and 12-point type and should not contain information that reveals the author’s identity. Manuscripts should be sent to: TSLL@austin.utexas.edu. Receipt of a manuscript is acknowledged. Decisions take two to four months and require strong recommendations from one to three reviewers and the editors. Please note we will review only one submission per author per year. TSLL does not accept notes or book reviews.

Articles submitted to Texas Studies in Literature and Language are initially reviewed by the editors, who determine whether the manuscript will be sent to outside reviewers. If chosen for review, the manuscript is then evaluated in a double-blind process by at least two and usually three outside reviewers, including members of the journal’s Editorial Board, and/or other experts in relevant fields as selected by the editors. This peer review process is designed to ensure that  TSLL publishes only original, accurate, and timely articles that contribute new knowledge, insights or valuable perspectives to our discipline.

The editor(s) and editorial board of Texas Studies in Literature and Language are committed to the following:

This special issue of Texas Studies in Literature and Language focuses on the British Nobel Laureate Kazuo Ishiguro. We welcome submissions on all aspects of Ishiguro’s oeuvre – from his novels, stories, and screenplays to his musical compositions – and from any methodological angle or approach: historicist, formalist, psychoanalytic, postcolonial, Marxist, bibliographical, feminist, queer, trans, ecocritical, new materialist, or something else altogether.  We also welcome essays discussing the two cinematic adaptations of Ishiguro’s novels The Remains of the Day and Never Let Me Go, the stage adaptation of Remains, or the radio drama or audiobook versions of any of his works.

Please submit manuscripts of 6,000-9,000 word inclusive of notes and works cited, in the most recent version of Word and MLA format (TSLL uses the MLA Handbook, 9th edition). Submissions must be double spaced in courier font and 12-point type and should not contain information that reveals the authors identity. Submissions should be sent to tsll@austin.utexas.edu with an email subject line: “Ishiguro Special Issue Submission.”

Acceptance Policy
All advertisements and use of lists are limited to material of scholarly interest to our readers. A sample mailing piece must accompany all list rental orders. If any advertisement or mailing piece is inappropriate, we reserve the right to decline it.