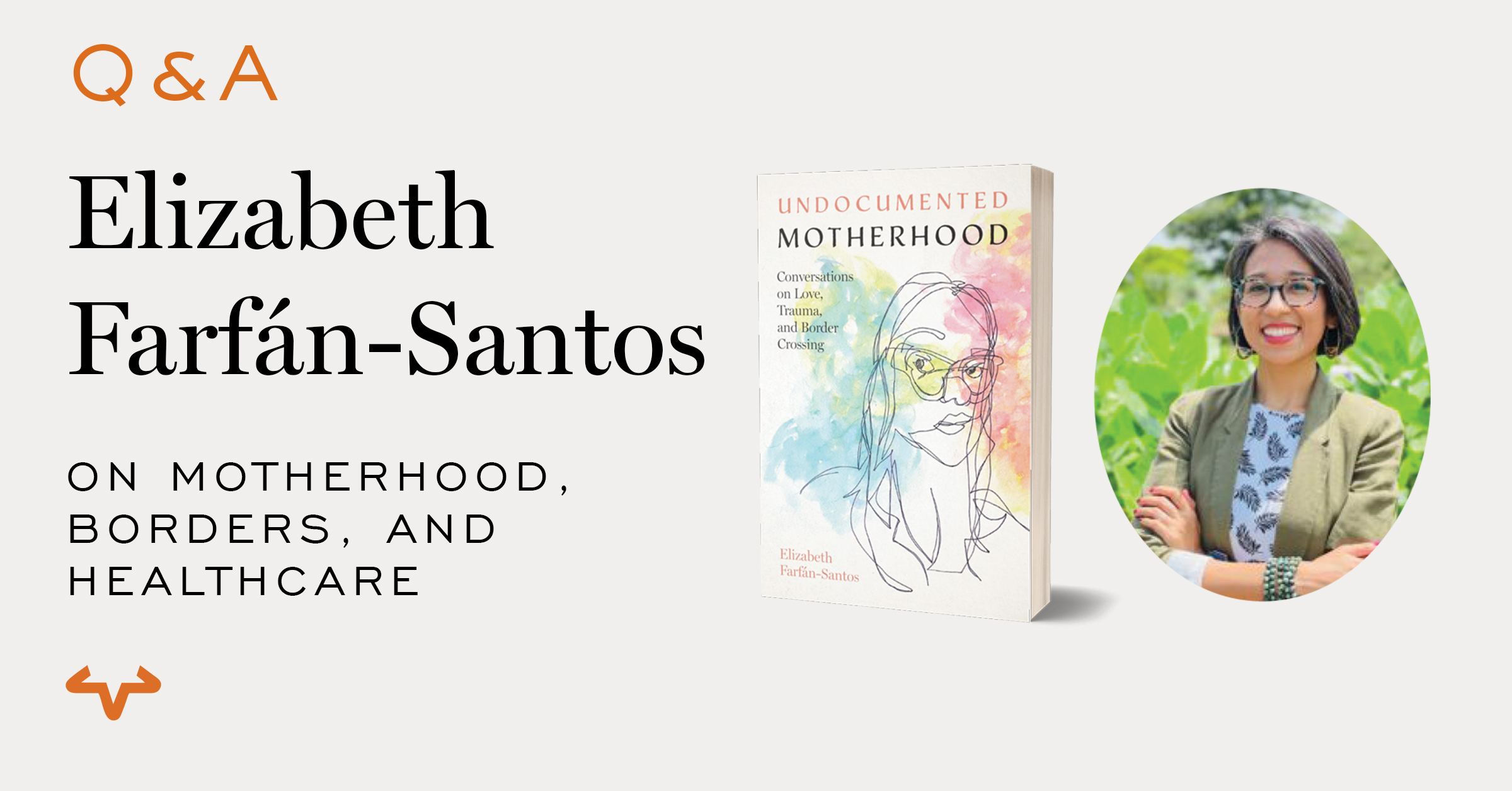 In her book Undocumented Motherhood, author Elizabeth Farfán-Santos combines oral history and personal reflection in revealing how immigration status impacts health care experiences. As part of this work, she shares stories from the life of a woman she identifies as Claudia García (a pseudonym), who crossed the border from Mexico into Texas seeking health care for her deaf daughter. Below, Farfán-Santos answers questions about her research process and offers some insights into her book.

In many passages in Undocumented Motherhood, your mothers’ narrative, your reflections, and Claudia’s narrative flow between each other fluidly rather than being divided into separate chapters or sections. How did you determine which narratives to connect? How does this literary device serve the work? Were there specific parallels you wanted to draw attention to?

My mother’s narrative, and questions about her experiences and memories, naturally came up for me as I was working through Claudia’s story, transcribing interviews and trying to make sense of the layers of her narrative. I wanted to mimic this flow of remembering in my writing. As I was piecing together one story, another was also being remembered. That is why the stories flow or weave in and out of each other throughout the book, because that is how they came together for me as I was writing—thoughts and feelings, memories and questions activated all at once.

I believe this is the way all writing occurs; the author is never an objective, “fly-on-the-wall,” tool of observation and documentation but rather an active participant and co-creator in the stories she engages with and witnesses. But there weren’t always parallels. Claudia and my mom are not the same and their stories, while sharing powerful connections, also had significant differences. Where I felt there were important connections, as in the way the border impacted their families and experiences of motherhood or in their relationship to their own health, I allowed those narratives to weave in naturally. But I was also very careful not to force parallels; therefore there are also chapters that are just about Claudia’s experiences. I think this device served the work because it draws the reader into the conversation and perhaps even invites them to reflect on their own experiences and maternal narratives.

How did your specialization as a medical anthropologist influence your process of recording Claudia’s oral history?

I was always thinking about the connections between Claudia’s experiences and her health (physical, mental, and spiritual). As medical anthropologists we know that health and illness are social, cultural, and political—that illness is shared and impacts everyone (families and larger communities), not just one individual, and so too is health created and experienced with others in community. Throughout the book I do the work of connecting individual experiences back to sociocultural and institutional discourses and practices to emphasize the complex and multilayered experience of illness—and consequently the layers of sedimentation that stand in the way of healthy lives and futures.

Western biomedicine has taught us that illness and disease are just localized in the body and that for the most part it’s the individual’s sole responsibility to care for their own health—in other words, if you’re sick, not only is it your problem but it’s likely also your fault. This is largely how our medical institutions and how we, as a population, think about illness and health. But this couldn’t be further from the truth, and we know it.

In recording and retelling Claudia’s story, I am modeling the interconnectedness of life and the ways in which our environments and experiences impact our physical bodies and emotional and spiritual wellness as a way of challenging individualistic and pathologizing biomedical discourses—discourses that not only perpetuate illness, because sociocultural and political factors are minimized or ignored, but that also erase the role that institutions and governments play in contributing to illness and their responsibility for creating and supporting healthy environments. In essence, I’m thinking about how culture (in its broadest sense) contributes to illness, but also about the protective and healing aspects of culture and communities. Ultimately, this is what medical anthropology is about.

In Undocumented Motherhood, English and Spanish text are integrated, and in at least one section, you note that you intentionally left Claudia’s words untranslated to preserve the intimacy of the conversation. At what point during the process did you decide to arrange the manuscript this way? How does the interplay between the two languages help the book reach its goals?

I knew from the beginning that I would leave words and portions untranslated. As I said, it preserves intimacy but also there are words in Spanish that simply do not have an exact English translation. For example, I spent an entire chapter explaining, defining, and ultimately modeling comadrazgo because it is a word that carries so many different uses and potential meanings. Language is always situational, meaning it is not only is determined by the particular context of the conversation but also by a person’s multiple layers of identity and experiences, as well as by many other sociocultural factors.

Additionally, alternating between English and Spanish is my most comfortable and natural way of speaking and engaging with people. Speaking in both languages, speaking Spanglish, is how I feel most authentic and in flow with my Mexican, American, and Chicana identities and therefore in flow with my multiple communities. I think this also helps the reader connect more deeply and authentically to the multiple narratives and experiences in the book. Sometimes just seeing a common word like desahogo or pendiente immediately takes you back home, to your mom or grandmother. The words trigger profound feelings and rooted memories.

You note that some stories are left out, both to honor Claudia’s requests and protect her family and because “not everything has to be written and published.” How did you make these calls about which elements needed to be shared and which were important to keep private, balancing your personal relationships (with both Claudia and your mother) with your work as an anthropologist?

With some things, I relied on my gut and I treated Claudia the way I would want someone to treat my grandmother or my mother. However, as someone who has done extensive research on immigration, health access, and race and gender exclusion, I am also hyperaware of the kinds of narrative and everyday life details that can easily be used not just to potentially identify a subject but also to further marginalize and demonize a group of people. There were some very interesting and even shocking details that I’m sure would have garnered a lot of attention, but it wasn’t worth the multiple risks to include them.

There is already so much media and even some academic writing that capitalizes on the suffering of marginalized communities for profit, status, or simply shock value. Not only did I not want to contribute to that, but I also wanted to make sure the focus stayed on the overall messages of the book. In the end, the things I left out didn’t impact the story. My book isn’t fiction (although even that has an impact) — it’s about real people and real communities. What I write matters and, as in real life, there are things that we do or that we experience that we can’t and shouldn’t share with everyone, for many reasons. This is especially true for undocumented communities, given the aggressively hostile nature of our society toward them.

The political rhetoric surrounding immigration and health care in the United States has changed dramatically multiple times in the past two decades. What are the most important political contexts for this book?

Actually, the political rhetoric surrounding immigration and health policy hasn’t changed much for undocumented immigrants in the past two decades. The previous US president was more outwardly vicious, that’s for sure, but ultimately political practices and policies have been consistently vicious and unrelenting when it comes to excluding, alienating, and scapegoating undocumented immigrants. Undocumented immigrants have long been excluded from government-funded programs, their access to basic public resources such as education and public health care have been challenged since the early twentieth century, and before that Mexican-origin peoples were treated as a public health and population problem for which forced sterilization and poisonous fumigations were legally sanctioned.

Perhaps the language has changed a bit over time, but not by much. This is the most important political message of the book—that despite generations of exclusion and alienation, undocumented communities have continued to survive and even thrive and this is due in large part to the labor and care work of women and mothers, who sustain entire families and communities, creating healthy futures where none are given, often at the expense of their own health.

Elizabeth Farfán-Santos is a medical anthropologist and the author of Black Bodies, Black Rights: The Politics of Quilombolismo in Contemporary Brazil.