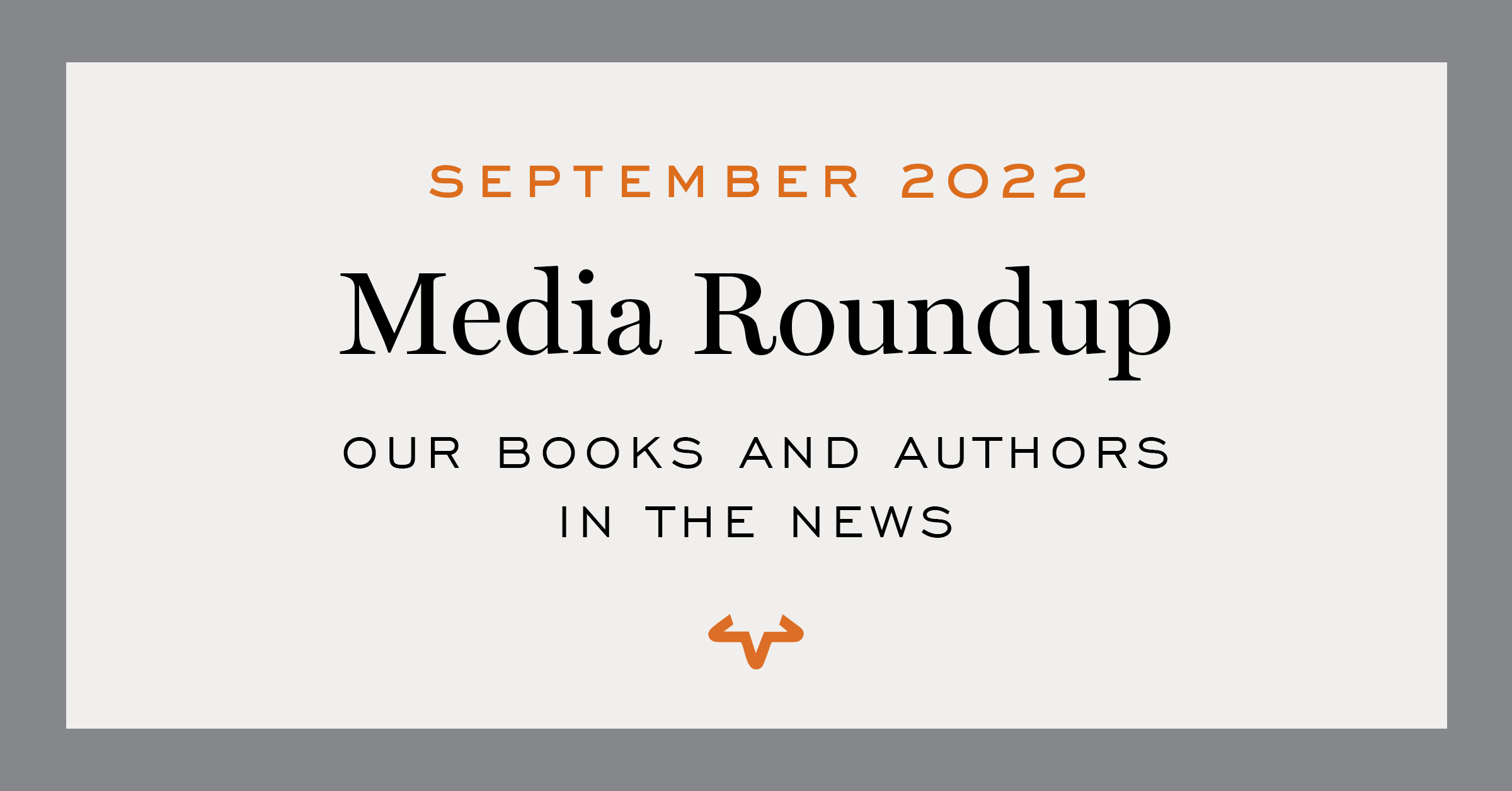 In celebration of Latinx voices this month, we are highlighting some of our Latin American History and Latinx/Chicanx History titles that got a bit of love last week. Next, we’re moseying on down to Music town to take a look at some exciting and extensive media coverage for one of our most popular subjects. Enjoy!

Ana Sabau, author of Riot and Rebellion in Mexico, was interviewed about her book on the New Books in Latin American Studies channel of the New Books Network.

The Mexican American Experience in Texas was highlighted in a feature “Celebrating Hispanic Heritage Month” at UT’s Division of Diversity and Community Engagement.

Reading, Writing, and Revolution was reviewed in Aztlán: A Journal of Chicano Studies. Mariana E. Ramírez writes, “Barragán Goetz presents refreshing historical insights into how Mexican communities organized efforts to create and build institutions focused on the educational well-being of children and youth.” Ramírez goes on, “Barragán Goetz makes critical contributions to scholarship on Chicana/o educational history, educational history for communities of color, and ethnic studies,” concluding, “Reading, Writing, and Revolution will appeal to scholars of social movements, educational history, and ethnic studies. Barragán Goetz’s work adds to a growing body of scholarship about the work of Mexican educators and families who collaborated to create new possibilities for all students, including those in succeeding generations.”

Margo Price’s appearance at the Texas Book Festival for Maybe We’ll Make It was highlighted in pieces on the festival’s lineup at the Austin Chronicle, CultureMap Austin, and the Austin American-Statesman. Price’s appearance last week in conversation with Marissa R. Moss at the Park City Song Summit was also highlighted in pieces at Wide Open Country and at Park City’s TownLift. In the Wide Open Country piece, Matt Wickstrom writes, “The raw and intimate conversation explored everything from Price’s rural upbringing to struggles with her marriage, body image and substance abuse, showing a new side to the outspoken country musician not seen before. The conversation was a splendid reminder that, whether they show it or not, everyone deals with self-doubt and other depreciating thoughts. However, it’s how you handle that turmoil and doubt that help to define you as a person. Price is a prime example of that, illustrating how to turn bad moments into positive learning experiences by continually growing through the ups and downs of life.”

DJ Screw was reviewed at The Baffler. Highlighting both DJ Screw and Houston Rap Tapes, Adrian Nathan West writes, “With DJ Screw: A Life in Slow Revolution, and its companion volume, Houston Rap Tapes, [Walker] has made the story of rap in Houston accessible for those who weren’t there to experience it. In both books, Walker is discreet, taking up only as much space as necessary to put order to his narratives and leaving the rest for witnesses and participants to fill in. His work is a portrait of a time hard to remember now, even for those of us who lived it—the years before internet and cellphones, when you stayed up late to hear music on college radio stations, holding a tape recorder to the speaker, and flea markets were still the place to get knockoff copies of new music—and it deserves a place alongside such classics of American oral history as Please Kill Me, The Other Hollywood, and Meet Me in the Bathroom.”

Caryn Rose, author of Why Patti Smith Matters, was interviewed about her book on Michigan Radio’s “Stateside” podcast.

A March 2023 event for Black Country Music was highlighted in a piece at the Memphis Commercial Appeal on the Stax Museum’s “20th anniversary in 2023: Here’s a look at how it plans to celebrate.”

The Running Kind received a shout-out in an interview with Elizabeth Nelson of The Paranoid Style at the Southwest Review, mentioned in response to the question, “Top three music bios—go!”

Where the Devil Don’t Stay was mentioned in a remembrance of Wes Freed at Richmond Magazine.

Mary Beth Rogers, author of Hope and Hard Truth, wrote an essay for the Houston Chronicle titled, “Can’t imagine a Democratic Texas governor? Let me tell you about Ann Richards.”

Chican@ Artivistas  was reviewed in Aztlán: A Journal of Chicano Studies. Susan Sepulveda writes, “As an interdisciplinary text, Chican@ Artivistas contributes to the fields of Chicana/o, feminist, music, and performance studies, translocal and transnational studies, and scholarship on US-Mexico fandango music. The book offers a nuanced view of Chicana/o ethnic and political identities, subjectivities, and social justice projects that have been overlooked in Chicana/o music genealogies and social activism.” Sepulveda concludes, “This text will be a useful pedagogical tool for presenting rigorous ideas in accessible language to undergraduate and graduate students in various fields while also serving more expansive communities including artists, musicians, and social activists.”

Modernity for the Masses was reviewed at H-LatAm. Emilio de Antuñano writes, “Modernity for the Masses is thoroughly researched and beautifully written and edited. This is an evocative history, rich in intriguing crossings between Buenos Aires, Barcelona, Paris, and other cities. It will surely interest historians of architecture and historians of Latin America,” concluding, “León offers a rich account of the architectural field and the larger context in which architecture is conceived, consumed, and understood.”

Arrian the Historian was reviewed at Histos. Christoper Baron calls it, “A brief but excellent book,” going on, “Leon has produced an important contribution to the study of Arrian, of Greek historiography, and of the intellectual culture of the second century CE. The book is well written and enjoyable to read.”

Ending this week’s roundup with some major and exciting news from one of our distribution partners: Ibn Arabi’s Small Death, published as part of CMES’s Modern Middle East Literatures in Translation Series, was longlisted for the National Book Award for Translated Literature, as shared at The New Yorker.

All right, gang. We’ve reached the end of the line. As per usual, I had fun and I hope you did too. Until next time, friends. Have a great one!