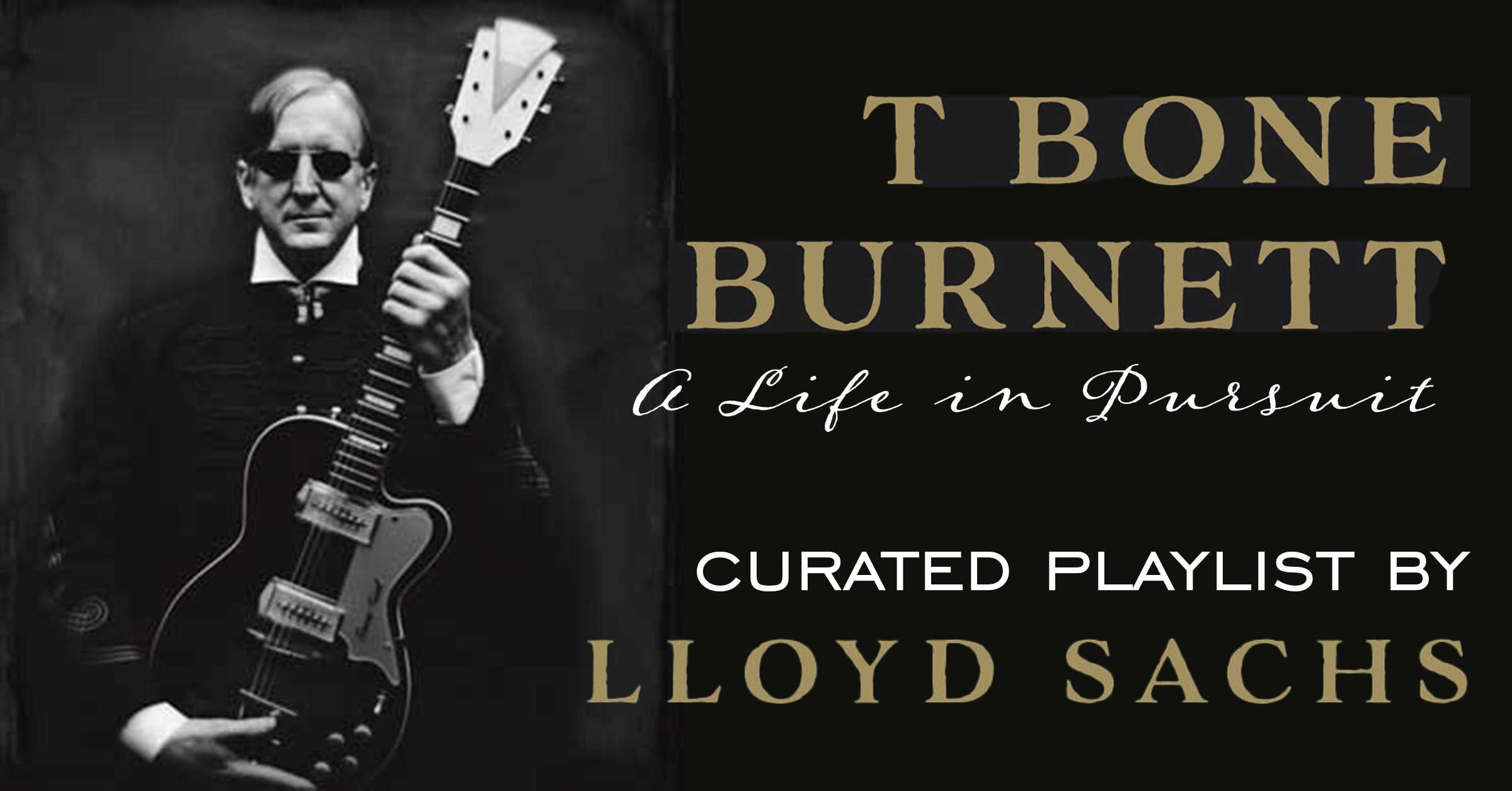 It’s well neigh impossible these days to come across a mention of T Bone Burnett that doesn’t begin with “great” or “visionary” or “legendary.” No argument here. Unlike so many of the artists hoisted in today’s 24-hour Twitter cycle – how about that reissue by the great Milli Vanilli? – Burnett fully deserves the encomiums.

But it’s not just as a record producer – the role for which he is best known – that the Texas native deserves to be considered in such rarified terms. To gaze back at his 40-plus years in the business is to be amazed not only by all the breakthrough albums that bear his signature, but also all his achievements as a singer and songwriter in his own right, as a sound artist and soundtrack auteur, as a theater composer and curator for projects big and small. As I proclaim in my book, T Bone Burnett: A Life in Pursuit, “record producer” can no more contain Burnett than “film director” could Orson Welles.

It is fascinating to consider the different roles this man of many dimensions has played – and the contradictory sides of his personality that have frequently defined those roles. In calling attention to his multiple identities as an artist and individual, the chapter titles of A Life in Pursuit provide a great template for a playlist of songs he has recorded, produced or programmed. Feel free to hit shuffle. As someone raised on Texas blues, Burnett would take that as a compliment.

“Street in Paris” – Whistler, Chaucer, Detroit and Greenhill (from the chapter Sound Citizen): Written by young Burnett, who produced it at his own Sound City studio in Fort Worth, this melodramatic art-rock oddity by an ad hoc, fake-named band of young locals sounds like a psychedelic hangover from the Legendary Stardust Cowboy’s infamous T Bone production “Paralyzed.” Featured on The Unwritten Works of Geoffrey, Etc., a 1968 release regarded by some as a cult classic.

“We Have All Got a Past” – J. Henry Burnett (from The Outsider): On his first album, The B-52sand the Fabulous Skylarks, recorded in Los Angeles with a bunch of Texas homeboys, Burnett engaged in a full spectrum of styles. This rollicking, gospel-driven tune reflects his debt to the Leon Russell/Mad Dogs and Englishman school of blue-eyed soul.

“Hula Hoop” – T Bone Burnett (from Player in the Band): As a guitarist in Bob Dylan’s Rolling Thunder Revue, the largely unknown Burnett got to perform a song or two of his own each night. “Hula Hoop” (here taken from his 1983 album, Proof Through the Night) introduced him as an edgy upstart taking aim at the corporate world.

“You Angel You” – The Alpha Band (from Alpha Male): Best known for its fractious/righteous Christian statements, this collective trio of Rolling Thunder alumni played it sweet and straight on this lovely Dylan cover. With guest Ringo Starr on drums and harmony vocal, the song is transformed into a fetching rockabilly number.

“Boomerang” – T Bone Burnett (from Spiritual Gumshoe): There are deeper cuts on Truth Decay, regarded as Burnett’s real solo debut, but this Alpha Band leftover is the track with which I went all in on T Bone. The hookiest item in his catalog, it boasts a skewed narrative in which “thieves and debutants talked in italics.”

“Still the Night” – BoDeans (from Master Builder). This little Wisconsin band that could, and did, was one of the groups with which Burnett became known for his Midas Touch as a producer. “Still the Night,” from their 1986 debut, Love & Hope & Sex & Dreams, frames their quirky vocals and electro-acoustic sound to perfection.

“The People’s Limousine” – The Coward Brothers (from Co-Conspirator): A bonus attraction on Elvis Costello’s 1984 solo tour, for which Burnett was opening act, long-lost sibs Howard and Henry (Elvis and T Bone) ripped though old favorites like George Jones’ “Ragged But Right” and Bobby Charles’ “Tennessee Blues.” This boisterous original, their only single, is about a girl in crystal heels who becomes involved in some serious foreign intrigue.

“River of Love” – T Bone Burnett (from Seeker): This acoustic gem from Burnett’s self-titled 1986 album is as close to perfection as he has come as a writer and singer in espousing deep religious belief and the ongoing struggles required to attain it.

“Baby I Can’t Please You” – Sam Phillips (from Svengali): MartinisandBikinis is a high point of Burnett’s work with Phillips, and this ravishing number, with its unshakable melody and seductive raga effects, is one of the reasons why. I inexplicably mistitled it in the book. Deep apologies to the artists.

“Image” – T Bone Burnett (from Imagist): Four people, each speaking a different language, repeat the same lines about their images letting each other down. I have gone from actively disliking this experiment to finding it oddly fascinating to considering it an essential piece of the T Bone puzzle. Van Dyke’s beautiful tango arrangement helps a lot.

“In Dreams” – Roy Orbison (from Native Son). Orbison’s career underwent a major revival after David Lynch prominently featured this 1963 classic in Blue Velvet and Burnett produced a new version of it for an album of Orbison remakes. The Big O lives!

“Make the World Go Away” – Joe Henry (from Mentor): The only non-original on Henry’s mercurial masterpiece, Shuffletown, this Hank Cochran tune reflects this singular artist’s appreciation of American song monuments in much the same way Burnett’s performances of “You Are My Sunshine” do.

“Great Big Love” – Bruce Cockburn (from Hit Man): Who knew how bright and breezy Cockburn could be? Bringing out the high-minded Canadian’s melodic gift in shimmering settings, Burnett revealed a side of the artist that hadn’t been heard before, without compromising his identity.

“Over You” – T Bone Burnett (from Reluctant Artist): You wouldn’t know from this infectious, slap-happy tune, featured on The Criminal Under My Own Hat, that Burnett had to be talked into making the first new record of his own in several years. This song, featuring bassist Roy Huskey, Jr. perfectly negotiates resignation and rebirth, hope and despair.

“6th Avenue Heartache” – The Wallflowers (from Starmaker): I had no idea who this song was by when I first heard it in a noisy bar, only that it completely commandeered my senses with its urgency, infectiousness and pop romanticism. It remains Jakob Dylan’s finest moment.

“Strike a Match” – Cassandra Wilson (from Company Man): Burnett introduced this song in a theatrical performance with Sam Shepard. The sublime Wilson’s version, heard on her Burnett-produced Thunderbird and his soundtrack for Wim Wenders’ Don’t Come Knocking, takes the song even deeper into the realm of mystery: “Strike a match so I can see if I’ve been down here before/Where is the floor/What is it for?”

“Hard Time Killing Floor Blues” – Chris Thomas King (from Coen Brother): The young blues star recorded this unheralded song from O Brother, Where Art Thou? live on set on a movie ranch near Los Angeles. “You can hear how loud the crickets are,” Burnett remarked. Was that a result of real-time engineering or a message from beyond from Buddy Holly and the boys?

“Trouble of this World” – Bill Landford and the Landfordaires (from SoundtrackAuteur): Thanks to The Ladykillers, the Coen Brothers’ remake of the beloved British comedy, there was a run on Google by people wanting to know who the heck these gorgeous harmonizers were. This 1949 recording plays a big role on Burnett’s soundtrack, both on its own and as remix-ready source material.

“The Fan Dance” – Sam Phillips (from Minimalist): Making her first record in several years, Phillips took a sparer approach with her words and music. Burnett, making a key advance in the development of his stripped-down, bottom-rich sound, was with her every understated step of the way.

“Earlier Baghdad (The Bounce)” – T Bone Burnett (from Lead Actor): A darkly glowing, blues-based reverie, narrated by a broken man who “lost sight of the light.” One of Burnett’s most affecting songs, it is seamlessly woven into his most convulsive album, The True False Identity.

“Fortune Teller” – Robert Plant and Alison Krauss (from Alchemist): There are so many great tunes on Raising Sand, and so little space to praise them, so let’s use this occasion to pay tribute to the ’60s hit “Fortune Teller,” which the late Allen Toussaint wrote under the name Naomi Neville. Everything about Burnett’s swampy treatment of it is on edge. It’s a sensory sensation.

“Throw It Away” – Betty Buckley (from Jazz Man): The long-belated reunion of Burnett and his old Fort Worth pal made for a great story, but who could have expected the Broadway diva to hit such poignant depths? Her rendering of this song by the late, great Abbey Lincoln is a vote in favor of certifying it as a new jazz standard.

“See That My Grave is Kept Clean” – B.B. King (from Blues Man): On what proved to be the blues legend’s final album, One Kind Favor, Burnett returned him to stellar songs and arrangements from early in his career. On this Blind Lemon Jefferson tune, King responds with a combination of raw truth and joyful energy that leaves you looking forward, not back.

“Voyeur” – Elton John (from Senior Advisor): In coaxing the British superstar to return to his acoustic roots on The Diving Board (2013), Burnett scored one of his great triumphs as a producer. This wistful ballad, a blend of tender vocal, rhapsodic piano lines and subtle atmospherics, is one of the album’s highlights.

“If I Die Sudden” – John Mellencamp (from Audio Activist): On which the Hoosier hero, recorded by Burnett in the most skeletal settings, traffics in the ghostly visions of Son House, Woody Guthrie and Dock Boggs. Burnett’s freakish electric guitar provides the kind of jolt an acid-tripping boom box would give to a graveyard in the middle of night.

“Please Mr. Kennedy” – Justin Timberlake, Oscar Isaac and Adam Driver (from Dylanologist): Burnett characterized this track, written by him and several others, as “a takeoff on a parody of a satire.” So why of all the music to come out of Inside Llewyn Davis, the Coens’ paen to the ’60s folk scene, does it stand out? Credit its cracked wordplay, manic energy and devil-may-care spirit.

“Far From Any Road” – The Handsome Family (from Televisionary): This rambunctious, dark-tinged tune had been out for several years when Burnett tapped it as the theme for True Detective, HBO’s hit serial killer series. It struck such a chord that many viewers had to be restrained from tossing their screens through the window when a Leonard Cohen song replaced it for season two.

“She’s Got You” – Rhiannon Giddens (from Back to the Futurist): On her fantastic debut album, “Tomorrow is My Turn,” this wondrous singer offered a personal survey of songs and styles that had strongly influenced her. With its lived-in emotion and easy authority, this interpretation of the Patsy Cline hit is a true revelation.

A nationally known voice on popular culture, Lloyd Sachs has written about pop music and jazz for many publications, including Rolling Stone, the Washington Post, DownBeat, the Village Voice, USA Today, and JazzTimes. He was a longtime music columnist and award-winning editorial writer at the Chicago Sun-Times and a senior editor at No Depression, the prized “alt-country” magazine.