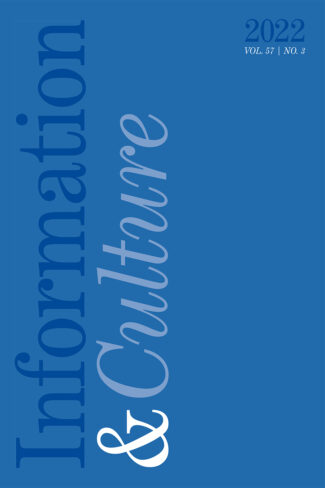 Single Articles and Discounted Back Issues

Enter the journal volume and issue numbers in the available fields. See Recent Issues tab for journal details. **IMPORTANT** For single article and back issue orders, please email journals@utpress.utexas.edu to confirm availability PRIOR to payment.

Information & Culture is an academic journal printed three times a year by the University of Texas Press. It publishes original, high-quality peer-reviewed articles examining the social and cultural influences and impact of information and its associated technologies, broadly construed, on all areas of human endeavor. In keeping with the spirit of information studies, we seek papers emphasizing a human-centered focus that address the role of and reciprocal relationship of information and culture, regardless of time and place.

Computer Dating in the Classifieds: Complicating the Cultural History of Matchmaking by Machine
by Bo Ruberg

Everything Old is New Again: A Comparison of Midcentury American EDP Schools and Contemporary Coding Bootcamps
by Kate M. Miltner

The Telegraph, Bandwidth, and the News Story
by Richard B. Kielbowicz

Social Media and the Automatic Production of Memory: Classification, Ranking, and Sorting of the Past, by Ben Jacobsen and David Beer
reviewed by Trang Le

Who is Watched? Racialization of Surveillance Technologies and Practices in the US-Mexico Borderlands
by Josiah Heyman

Race, Algorithms, and the Work of Border Enforcement
by Juan de Lara

The Everyday of Future-Avoiding: Administering the Data-Driven Smart City
by Leah Horgan

The Gentrification of the Internet: How to Reclaim Our Digital Freedom, by Jessa Lingel
reviewed by Kimberly Anastacio

Book Wars: The Digital Revolution in Publishing, by John B. Thompson
reviewed by Leah Henrickson

Technology and the Historian: Transformations in the Digital Age, by Adam Crymble
reviewed by Katharina Hering

No Incentives to Interact: A Case Study of Mobile Phone Interactions with Martin Luther King Jr. Memorials in Washington, DC
by Larissa Hugentobler

Negotiating the Past Online: Holocaust Commemoration between Iran and Israel
by Aya Yadlin

The Case for a Digital World Heritage Label
by Carl Öhman

The Queer Games Avant-Garde: How LGBTQ Game Makers are Reimagining the Medium of Video Games, by Bonnie Ruberg
reviewed by Daniella Gáti

Women's Activism and New Media in the Arab World, by Ahmed Al-Rawi
reviewed by Walid Ghali

Making and Debunking Myths about the Old West: A Case Study of Misinformation for Information Scholars
by William Aspray

Open Source Religion: Spiritual Software and the Production and Ownership of Religious Data (1955–2010)
by Andrew Ventimiglia

"The Little Strangers at Our Gate": Toronto Public Library's Experimentation with the Settlement House Movement, 1910s-1930s
by Elisa Sze

Notes from the Senior Book Review Editor
by James A. Hodges

Minding the Gap: Creating Meaning from Missing and Anomalous Data
by Ciaran B. Trace and Yan Zhang

Architects of Memory: Information and Rhetoric in a Networked Archival Age, by Nathan R. Johnson
reviewed by James A. Hodges

The Creativity Code: Art and Innovation in the Age of AI, by Marcus Du Sautoy
reviewed by Jina Hong

The Know Citizen: A History of Privacy in Modern America, by Sara E. Igo
reviewed by Andrea Ringer

Knowledge Organization in the Wild: The Propaedia, Roget's, and the DDC
by Jonathan Furner

Hegel and Knowledge Organization, or Why the Dewey Decimal Classification Is Not Hegelian
by Shachar Freddy Kislev

The Public Interest and the Information Superhighway: The Digital Future Coalition (1996–2002) and the Afterlife of the Digital Millennium Copyright Act
by Bryan Bello and Patricia Aufderheide

What Documents Cannot Do: Revisiting Michael Polanyi and the Tacit Knowledge Dilemma
by C. Sean Burns

The Promise of Artificial Intelligence: Reckoning and Judgement, by Brian Cantwell Smith
reviewed by Elliott Hauser

Cloud Ethics: Algorithms and the Attributes of Ourselves, by Louise Amoore
reviewed by Elliott Hauser

Reprogramming the American Dream: From Rural America to Silicon Valley—Making AI Serve Us All, by Keven Scott, with Greg Shaw
reviewed by Christine T. Wolf

The journal welcomes submissions from an array of relevant theoretical and methodological approaches, including but not limited to historical, sociological, psychological, political and educational research that address the interaction of information and culture.

Articles submitted to Information & Culture are initially reviewed by the editors, who determine whether the manuscript will be sent to outside reviewers. If chosen for review, the manuscript is then evaluated in a double-blind process by at least two and usually three outside reviewers, including members of the journal's Editorial Advisory Board, and/or other experts in relevant fields as selected by the editors. This peer review process is designed to ensure that Information & Culture publishes only original, accurate, and timely articles that contribute new knowledge, insights or valuable perspectives to our discipline.

A pre-print is defined as the un-refereed, pre-copyedited, author-version of an article submitted for publication.

A post-print is defined as the version of an article following peer review that contains author revisions but that has not been copyedited by the University of Texas Press journal that will publish the article.

A pre-print must be accompanied by this notice:  "This is an un-refereed, pre-copyedited version of an article submitted for publication in (Journal title, volume, issue number, and year).

A post-print must be accompanied by this notice:  "This is a pre-copyedited version of an article accepted for publication in (Journal title, volume, issue number, and year) following peer review.  The definitive publisher-authenticated version is available from University of Texas Press."

The Editorial office of Information & Culture follows the guidelines of the Committee on Publication Ethics (COPE) regarding allegations of potential research or publication misconduct. When a credible allegation is made the editorial staff will gather relevant documentation and then give the author(s) an opportunity to respond. The editors may request additional information from the author(s) to help verify the originality and/or the veracity of the work. The editorial staff may also seek advice from relevant experts, including Advisory Board members and The University of Texas Press.

The editorial office will reject submitted work in instances where plagiarized content is found in a manuscript. Any material found to include plagiarize content or fraudulent results post-publication will be retracted, and upon investigation, an expression of concern may be issued.

Readers, reviewers and editors can contact the editors about any suspicions of plagiarism by sending email to the editorial staff.

The final decision on a submitted manuscript is made by the editor(s). This decision is communicated to the corresponding author via email. The decision can be one of the following: accept, accept after minor revisions, reconsider after major revisions; reject and encourage resubmission, and reject. If the author(s) find something in the review materials or in the editors’ decision letter that is unclear or inconsistent, they may contact the editorial office for clarification.

The author’s appeal is allowed to override earlier decisions by the editors only when new information germane to the original review decision is presented. The author’s protest alone is not sufficient to affect the editors’ decision.

A conflict of interest occurs when an existing relationship (personal, financial, contractual, political, professional, religious, or otherwise) is perceived to impact the objectivity in presenting, reviewing, or publishing a piece of work. The Committee on Publication Ethics (COPE) states in its Guidelines on Good Publication Practice (2003) that ‘Conflicts of interest arise when authors, reviewers, or editors have interests that are not fully apparent and that may influence their judgments on what is published. They have been described as those which, when revealed later, would make a reasonable reader feel misled or deceived.’

Conflicts involving reviewers
Reviewers are expected to exclude themselves from evaluating manuscripts in which they have conflicts of interest. All information obtained in the reviewing process should be treated as confidential and not used for personal advantage.

If a study was sponsored/funded in its entity or in some part (the design, data collection, analysis, interpretation, manuscript preparation, etc.), the role of the sponsor/funder should be stated as well. If no funding has been received, the author(s) should state “The author(s) declare no financial support for the research reported in this article.”

Conflicts involving editors
Submissions authored by the current editors of the journal will be handled by a guest editor who will oversee the review process and the final decision on the manuscript in question.

The list of authors should accurately reflect who contributed to the work presented. All individuals listed as authors should meet the following qualifying criteria:

Contributions for those who do not meet the authorship criteria should be attributed in the Acknowledgement section. It is expected that authors include a general acknowledgement where their work has received substantial intellectual and technical help, including in the writing and editing of the manuscript.

Order and disambiguation of names
Any change to the list of authors or its ordering is expected to be agreed upon by all persons involved, including those whose names have been removed from the list. Any changes in authorship should be communicated in the letter to the editor. The editorial office encourages authors to take measures and remove potential ambiguity around personal names by using appropriate tools (e.g.. ORCID) that provide unique digital identifiers.

All advertisements and use of lists are limited to material of scholarly interest to our readers.  If any advertisement is inappropriate, we reserve the right to decline it.