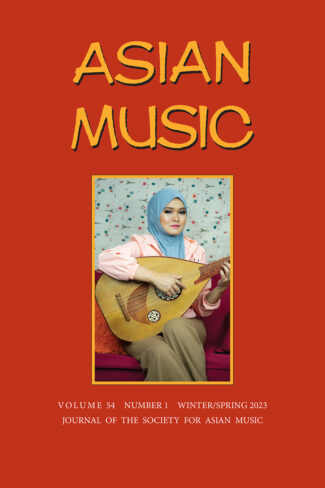 Single Articles and Discounted Back Issues

Enter the journal volume and issue numbers in the available fields. See Recent Issues tab for journal details. **IMPORTANT** For single article and back issue orders, please email journals@utpress.utexas.edu to confirm availability PRIOR to payment.

Asian Music, the journal of the Society for Asian Music, is the leading journal devoted to ethnomusicology in Asian music, publishing all aspects of the performing arts of Asia and their cultural context.

Staging Noh Performance in Contemporary Opera: The Dance of the Shite in Toshio Hosokawa's The Maiden from the Sea (2017)
by Paulo Brito

On the Threshold between Different Worlds: The Symbolic Role of Gongs in the Final Mortuary Ritual of the Jarai (Central Highlands of Vietnam)
by Vincenzo Della Ratta

Rethinking the Viruttam in Karnatak Music: Music for Poetry
by Charulatha Mani

Status, Prejudice, and Hierarchical Differences in the Communities of the Urban Burmese Spirit Cult
by Lorenzo Chiarofonte

Sonic Benefit: Buddhist Ontologies of Chant and the Supramundane in Bengaluru
by Tom Peterson

Cradle of Drone-Overtone and Timbre-Centered Music: Cultural Landscapes of the Indigenous Peoples of the Altai Mountain Range and Its Neighboring Areas
by Carole Pegg

Propriety, Property, and Heritage in the Performance of Mongol Khöömii
by Andrew Colwell

Gifts of the Sygytchy-Sons: Tethering Melodies to Land, Kin, and Life Engery at the Khöömei Ovaa, Tyva Republic
by Robert O. Beahrs

Khöömii, World Lists, and the Question of Representation
by Johanni Curtet

(Re)Claiming a Vocal Vernacular: Revival and Modernization in Kömei in Contemporary Kazakh Music
by Saida Daukeyeva

Khöömei and Heritage: An Afterword
by Theodore Levin

Khöömei—Ambassador to the World: An Afterword
by Valentina Süzükei, translated by Sean Quirk

Coptic Chant and Maqam: The Modal Heritage of a Liturgical Tradition
by Nicholas Ragheb

Asian Music welcomes articles on all aspects of the performing arts of Asia. The journal is refereed; all articles receive consideration by at least two readers. Contributors of essays will receive 2 copies of the issue in which their essay appears.

Preferred length is 10,000–12,000 words. Manuscripts in Word format (at least Word 97 or newer) should be made to conform to Asian Music style and should be submitted electronically in two files—an original version and a masked version for reviewing purposes. If the article is accepted for publication, the editors will request a revised file in Word and in pdf. We can duplicate nearly any diacritical.

Articles submitted to Asian Music are initially reviewed by the editors, who determine whether the manuscript will be sent to outside reviewers. If chosen for review, the manuscript is then evaluated in a double-blind process by at least two and usually three outside reviewers, including members of the journal’s Editorial Board, and/or other experts in relevant fields as selected by the editors. This peer-review process is designed to ensure that Asian Music publishes only original, accurate, and timely articles that contribute new knowledge, insights or valuable perspectives to our discipline.

The editor(s) and editorial board of Asian Music are committed to the following:

For information about the Society of Asian Music please use the link below.

In order to join the Society, subscribe to the journal.

All advertisements are limited to material of scholarly interest to our readers.  If any advertisement is inappropriate, we reserve the right to decline it.

These files can be e-mailed directly to cfarmer@utpress.utexas.edu