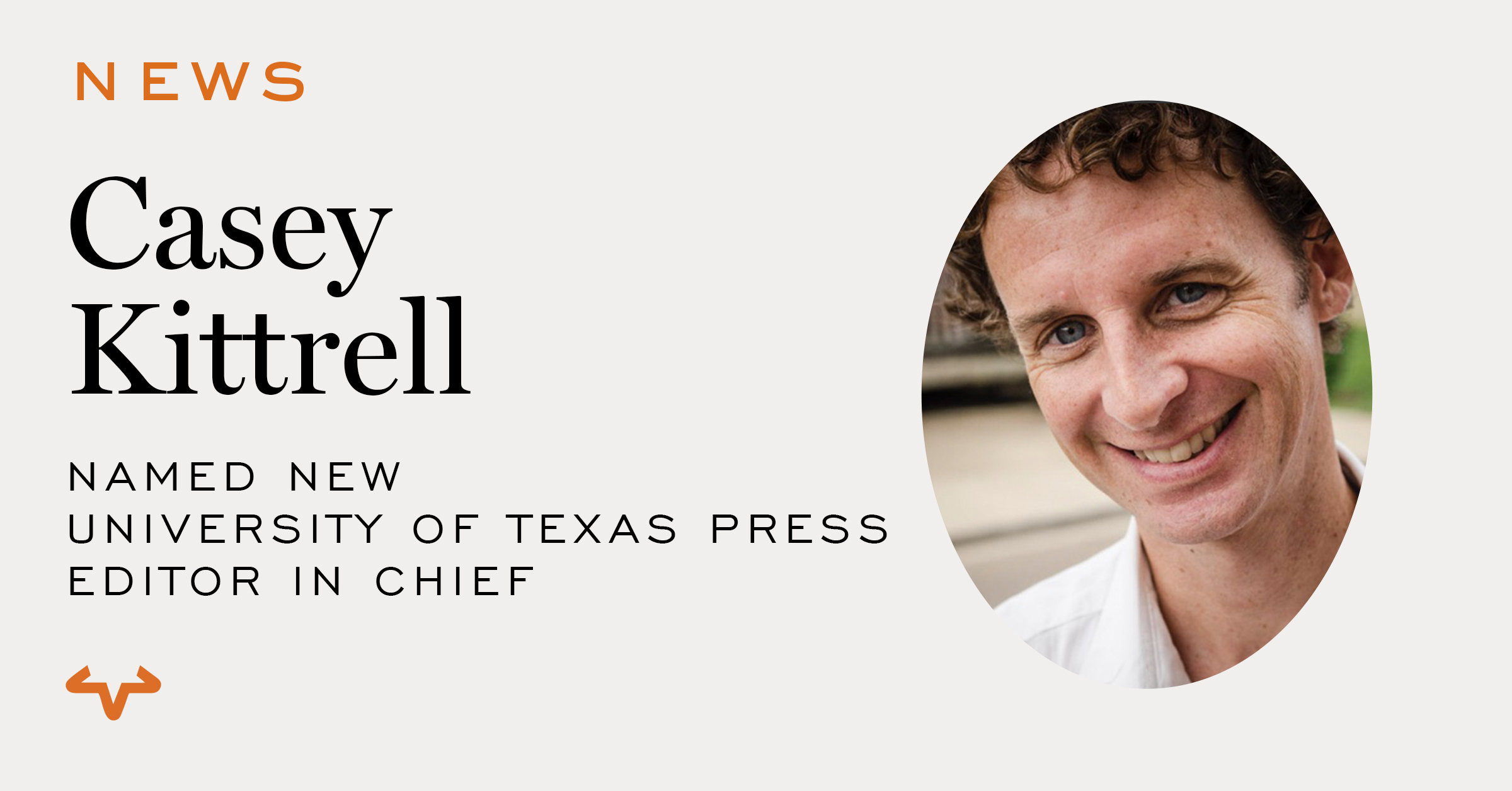 The University of Texas Press is delighted to announce that Casey Kittrell will be our next editor in chief! Kittrell has been with UTP since 2004, working his way up from publishing fellow to senior acquisitions editor. Working across a range of subjects, including music, food, and anthropology, Kittrell acquired the James Beard Award–winning The Jemima Code by Toni Tipton-Martin, New York Times best-seller Go Ahead in the Rain by Hanif Abdurraqib, and numerous winners of scholarly book awards.

“For years, Casey’s editorial work has resulted in some of UT Press’s most noteworthy publications,” says director Robert Devens. “Casey brings to his new role a host of skills that will serve him, the acquisitions team, and UT Press very well: he is a gifted teacher and mentor, a supportive colleague, and an advocate for diversity within our lists and within the press and the publishing community more broadly. He understands deeply the editorial history of UT Press, and he has the thoughtfulness and creativity to guide our editorial program into the future.”

“It has truly been a privilege to contribute to UT Press over the last eighteen years. I’m humbled and thrilled to lead the editorial team as we seek to publish more of the innovative, compelling, and essential books that make the press a vital part of the publishing community,” says Kittrell. “I look forward to continuing to work with great authors to bring great books to both scholarly and general audiences.”

Please join us in congratulating Casey, and read our Q&A with him below!

What was the first book you acquired?

There were a couple things that were passed to me but I think the first book I acquired on my own was One Hundred Bottles, a novel by the Cuban writer Ena Lucía Portela. We had a series, Latin American Literature in Translation, that had a series editor and generated about one title a year, which made it the perfect set of training wheels. Low volume that didn’t interfere with my assistant-ing, editorial oversight, lots of contractual issues to master. I was reading some other Cuban writers, and saw that the book had won a bunch of awards and was being translated into other languages. It was a translation challenge because the Spanish was full of contemporary Cuban slang, so I knew we needed the right translator and when I emailed Achy Obejas she said yes immediately. Her translation is a masterpiece and the novel is unforgettable.

What’s your favorite item you keep on your desk?

The new role has me extra busy and it helps to have a full mug of coffee so I’d say this:

I keep the message in mind, too. I want to say it was circa 2016? I’d been acquiring a lot of women authors—intentionally, for sure, but not, like, to the exclusion of anyone else. Things accelerated when Jessica Hopper, who I believe would identify as a feminist music critic, joined our music series. One observer wondered whether we might have “a feminist agenda.” As Phineas, of the great cartoon series Phineas and Ferb, would say, “Why yes, yes we do.” Our sales director Gianna LaMorte, who I believe would identify as a feminist bookseller, made it official that Christmas when she gave me this mug.

What are you currently reading?

How Far the Light Reaches: A Life in Ten Sea Creatures by Sabrina Imbler. For years, Catapult magazine has been my gateway to so many talented writers—Bryan Washington, Nicole Chung; I’ll stop now or we’ll run out of space—and as a former dive instructor I found Imbler’s column “My Life in Sea Creatures” irresistible. Not that you have to love the ocean to love this book. The writing is so fresh and inventive I’ve now set it down several times to pause, to just say, “Wow.” And then there are moments that, as my Canadian father-in-law would say, hit you right in the ole maple leaf. [taps heart, blinks watery eyes].