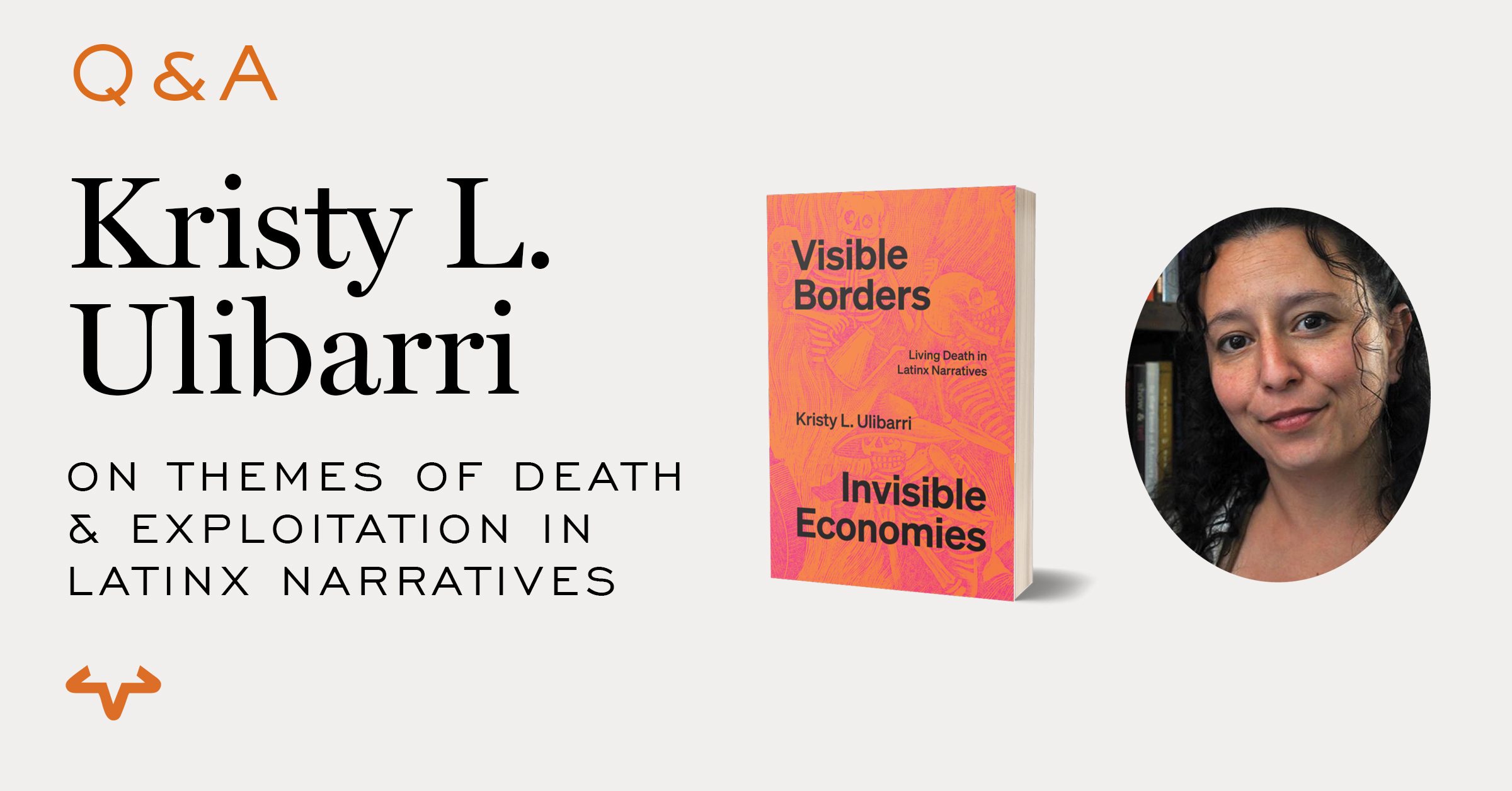 Visible Borders Invisible Economies: Living Death in Latinx Narratives is part of the Latinx: The Future Is Now series. The 2022 book by Kristy L. Ulibarri connects themes of social and physical death in Latinx literary and artistic texts to the politics of capitalism and globalization. Below, she discusses the process behind his book.

In the book, you discuss narratives found within films, performances, essays, and photography. What was your process when it came to collecting or curating the material discussed in each of your chapters?

Historically, Latinx literary studies have approached texts and narratives with the goal of intervening into a specific genre (such as the novel, spoken word poetry, and comic books), and this scholarship has traditionally been structured to speak to specific and select Latinx subjectivities (Chicanx, US, Central American, Puerto Rican/Nuyorican, Cuban, Caribbean, and so on). This has been important work in building a critical tradition around certain forms and in distinguishing between the many collectivities, ethnicities, and cultures that make up Latinx subjectivities.

Visible Borders, Invisible Economies breaks with this tradition because in it, I am thinking about how Latinx narratives (broadly conceived) capture and expose the social orders, political violences, and paradoxes within global capitalism.

To see these phenomena from different angles, I needed different forms and modes of engagement. For instance, I chose to bring Javier Hernandez’s El Muerto: The Aztec Zombie comic books into conversation with Judith Ortiz Cofer’s story “Talking to the Dead” not because I wanted Chicanx narrative-visual art and Puerto Rican literature to collapse into similar cultural and ethno-racial themes about the “living dead” but rather because these different genres and disparate perspectives allowed me to draw out the various ways that the political economy subjugates and homogenizes Latinx subjects and the distinctive modes in which resistance might be imagined. These cross-genre engagements come together as a larger “narrative” about the political economy.

Narrative, in this sense, is a framework for mapping the social order and political violence under global capitalism, and I chose different cultural texts that exhibit the various processes and structures at work.

In the first half of Visible Borders, Invisible Economies, I focus on documentation within novels, photography, and film, particularly how documentary forms construct a certain narrative about the border, the borderlands, and lived experience of Latinx and migrant subjects. The second half considers the speculative nature of narratives, from performance art to comic books to literature, and how they imagine futures, social possibility, and resistance in the face of political and economic subjection.

You begin your book with a discussion of biopolitics and necropolitics, and the sides of neoliberal states that become visible through these approaches. Why is this grounding important to your work?

These theoretical concepts allowed me to approach large-scale phenomena — such as globalization, neoliberalization, and late-stage capitalism — with a close eye to the people living and dying under these historical formations.

I define biopolitics and necropolitics (and their respective histories) more thoroughly in my introductory chapter in Visible Borders, Invisible Economies, but their foundations come from the etymology of their prefixes. The Greek term “bios,” for instance, points to various qualities of living and livelihood, while the prefix “necro-” (or its counterpart “thanato-”) signifies various forms and states of death. The term “politics” captures the codifications, regulations, and institutional forces (such as police or ICE agents) that determine these ideas of livelihood and states of death that shape the distribution of resources, wealth, and suffering.

In addition, biopolitics and necropolitics ask us to remember that there is a material and corporeal element to the increasingly abstract and mystifying social orders and systems of our current political economy. Both return us to the body in many ways. In doing so, they embed questions of biology, quality of life, decomposition, and slow death into our political and economic structures, such as labor, citizenship, deportation, and intensifying inequality. Latinx literature and cultural texts respond to these processes and reveal the interplay between a politics and economics that requires many to die (literally and symbolically) for the elite few to live (well).

In the book, you describe political erasure and disenfranchisement as types of “living death.”  What does the term “living death” signify for you, and how is it connected to physical death and violence?

“Living death” signifies the paradoxical positionalities of some communities and populations as they come in contact with current xenophobic nationalisms and populisms while working and moving under free-market capitalism. It is a phrase that Achille Mbembe uses in Necropolitics (2019) to describe the “necessarily violent” state of the global order, where some populations must be killed or made disposable for others to live (well). Populations living under siege and with this constant threat of death are always living-in-death.

In Visible Borders, Invisible Economies, I map out different ways that “death” might occur for people living in this paradoxical state, specifically the concepts of slow death, social death, and political death. For instance, when I read Francisco Goldman’s The Ordinary Seaman, I describe how the smuggled and undocumented characters must navigate the precisely ambiguous space of a freighter docked in Brooklyn, registered in Panama, and privately owned by a US entrepreneur. Throughout the novel, they are rendered politically dead, without rights or recourse in the United States, and socially dead as the owner eventually cuts them off from all food, money, or outside support, forcing them into various forms of desperation or emboldening them to learn to live in the shadows of New York City. By calling this “living death,” I draw out the point that these are situations where “death” is politically and economically mandated violence.

Nevertheless, I do not end on that note because, as we see in the case of The Ordinary Seaman, these characters eventually rise up against their exploitation, by either capsizing the freighter or by disappearing into the city. As such, “living death” also opens up possibilities for resistance, transformation, and different social formations.

In the book, you dive into the political contexts that shape immigration patterns and policy to contextualize the literature you analyze. Is there one example you feel demonstrates how inseparable immigration policies are from the theme of living death in the narratives you examine?

This is a very difficult question that productively troubles much of my work. On one level, I want to say that the social and legal realities of immigration MUST be separated from their representations within Latinx literary and cultural production. After all, these are very different processes and have disparate goals and consequences. While these politics might influence the scope and limits of a story, it is rare for literature or cultural texts to equally affect immigration policy in any real or meaningful way. Yet, because I am dedicated to historically, politically, and economically contextualizing literary and cultural representation, I often see entanglements of political reality and narrative representation. For instance, in the beginning of Visible Borders, Invisible Economies, I consider how violent policy such as Operation Gatekeeper or Hold the Line shapes our reading of texts like Luis Alberto Urrea’s The Devil’s Highway or of photographs like those from the Border Film Project.

There is also something to be said for how some immigration policies are not transparent in the United States. In my coda, I consider deportation narratives, where processes around deportation are not fully represented, and I argue that these texts mirror the fickleness of US immigration policy, where laws and processes can change at a whim, as we have seen with DACA in recent years. Violent and inconsistent policies, then, produce subjects who inhabit these contradictory states, a positionality that narrative can reveal more readily than policy.

In what ways do you feel this project in particular called for an interdisciplinary approach?

I wanted to produce a critical approach that addresses “narrative” and “story” across fields, disciplines, and texts. In some ways, I mean to push on the boundaries of what gets to be read “literarily” and to reconsider how we “read” cultural productions. More significantly, I think that studies of latinidad and studies grounded in histories of mestizaje require us to build from multiple critical spaces: the political, the economic, the historical, and the cultural in its various forms.

For me, what tethered these spaces together were narratives, and I chose texts that were in similar conversation about these spaces. For each chapter, I wanted these narratives to collude and collide with one another as a way to capture the larger and paradoxical picture of the current political economy. Together, these texts tell the story of global and national processes that render Latinas/os/xs and migrants necessary but disposable, a violent positionality that makes us the living dead and potentially produces different forms of comunidad.

How do you imagine or hope readers will interact with this work?

Visible Borders, Invisible Economies creates critical connections among cultural texts that are not normally put in mutual conversation and a wide range of scholarly works that, likewise, are not always in dialogue with one another. I hope that the book adds to and expands the scholarly conversation on Latinx literature and culture. On one level, bringing together literature, photography, visual art, film, and performance art offers new exchanges among cultural productions and constructs a wider view for Latinx studies.

Also, I have juxtaposed theoretical discussions that are not normally put in conversation and yet significantly overlap, such as José Esteban Muñoz’s call for disidentification and Jasbir Puar’s concerns around homonationalism. By doing this, I construct the matrices that are necessary for interrogating the political economy and offer new mashups for Latinx studies. By bridging these critical and cultural conversations, I impart the significant contributions that Latinx scholarship and cultural production make to broader conversations about globalization, market capitalism, and neoliberal states.

Kristy L. Ulibarri is an assistant professor in the Department of English and Literary Arts at the University of Denver.