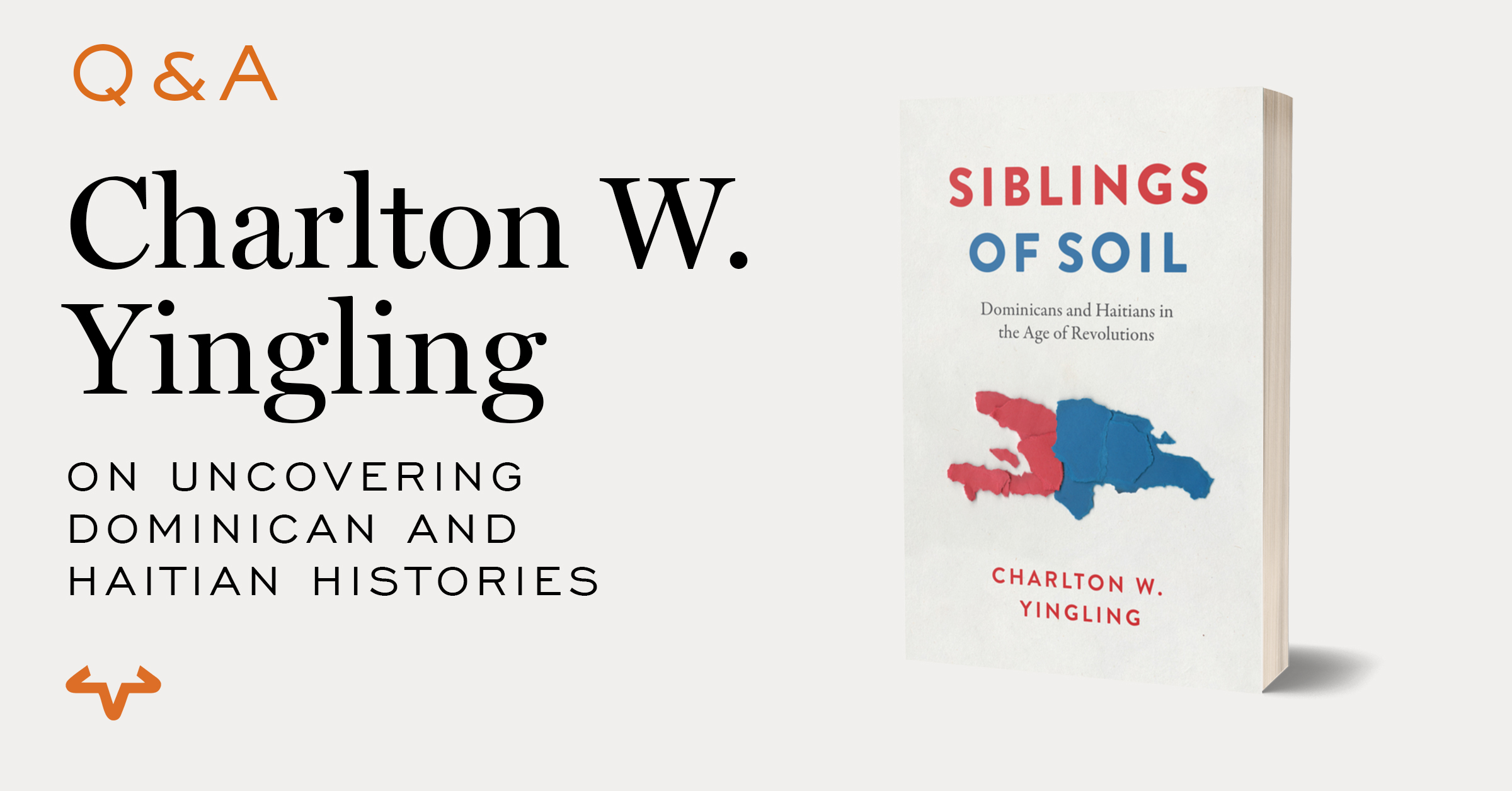 Charlton W. Yingling’s new book Siblings of Soil: Dominicans and Haitians in the Age of Revolution presents the overlooked history of Dominican and Haitian cooperation and unification in the nineteenth century. Dario Brooks consulted Dr. Yingling for this BBC Mundo piece on the twenty-two years when Haiti ruled Santo Domingo, and how that gave rise to the current relationship dynamic between the Dominican Republic and Haiti. Below, he discusses the process behind his book.

The history your book brings to light is one that has, for a long time, been distorted by other narratives. What were the forces that contributed to selective memory and the recasting of the relationship between Haitian and Dominican people in the political and popular imaginations?

As some readers may know, Dominican and Haitian relations have been extremely fraught at times, particularly at the state level. However, many Dominicans and Haitians live together convivially and cooperatively, albeit aware of countervailing currents. Evidence from the colonial and early national eras show that Dominican and Haitian cooperation was not only extensive, but critical to the end of the Spanish and French empires, and also British interventions, on Hispaniola.

Revolutionary and anti-slavery cooperation also triggered a narrative backlash from elites, which the book shows as forming a foundation of later antagonism. In particular, some strands of Dominican nationalism have asserted irreconcilable differences with Haitians, based in part on how they depict the 1822 unification with Haiti as an act of aggression.

With many examples that I cannot elaborate upon here given the with limited space, I show that the 1822 unification of Dominicans and Haitians, when slavery permanently ended for Dominicans, was one of the most peaceful instances of gaining independence in the Age of Revolutions, based on years of interplay and cooperation along with some amount of popular demand.

Central to your book is the idea of familial collaboration, that “the entire island has one family” and that Haitians and Dominicans are “siblings of soil.” How did this concept play out during unification and when did this perceived familial bond break?

Thank you for noticing and asking! These are both direct quotes from some historical agents themselves, particularly regarding how they saw themselves in the lead-up to the 1822 unification. Throughout the entire Age of Revolutions on the island, familiar language appeared in appeals for cooperation. However, it also appeared in, for example, exclusive descriptions concerned with Iberian lineage. The title of the introduction, “The Entire Island Has One Family,” could have been the book title. “Siblings of Soil” might capture parts of the book’s main argument even more directly, as this call was reciprocal, egalitarian, and mutual, with roots in a shared past located in a shared place and hopes for a shared future. Among other factors, during the era of unification with Haiti, old elite anti-Haitian tropes reemerged that eventually destroyed the ambitious experiment of a universally liberated, multilingual, multiracial republic.

What was the research process like? Were documents hard to access? Did you use any non-traditional archives?

My book is heavily archival. I visited well over a dozen archives in multiple countries with collections in multiple languages. Among these were national archives in the Dominican Republic and Spain. I conducted research in Haiti. I deeply admire the archivists there who have faced resource limitations, natural disasters, and occasional political turmoil to preserve precious information. I also worked in the Archivio Segreto Vaticano (Secret Vatican Archives), which was a unique experience for different reasons. I appreciate the grant funding that afforded me these opportunities.

During your archival research, was there any one object or document you found that surprised you or gave you a new understanding of events?

Yes, and the two very unique documents that immediately come to mind both regard religiosity, which is a major theme throughout the book.

Throughout, my book considers competitions among Vodou, Catholicism, secularism, and even Deism, and argues that beyond politics or abolition, one revolutionary aspect of this era was that it caused cosmological upheaval. On that point, I found a document from early Haitian revolutionary figures to Spanish allies in which they recast their initial revolt and the motives of one of the earliest leaders, Boukman, as being motivated in part by Catholicism, while somewhat downplaying the influence of Vodou. This meant a few things, of which I get into in much greater depth in the book, of course. For example, it may have shown how willing the Haitian revolutionaries were to secure direly needed support from Spain in the earliest years of their war with France, yet it may have also indicated spiritual flexibility.

The second document that comes to mind included an attempted revival of the French revolutionary Cult of the Supreme Being on Hispaniola in the waning years of the Haitian Revolution, apparently in part as an attempt to bridge divides over race and between Catholicism, Vodou, and other spiritualities with a unifying Deism. It also praised Toussaint Louverture, one of the most important figures in the history of the Americas. This experiment failed, though not before producing fascinating results.

Charlton W. Yingling is an assistant professor at the University of Louisville. He coedited the book Free Communities of Color and the Revolutionary Caribbean.