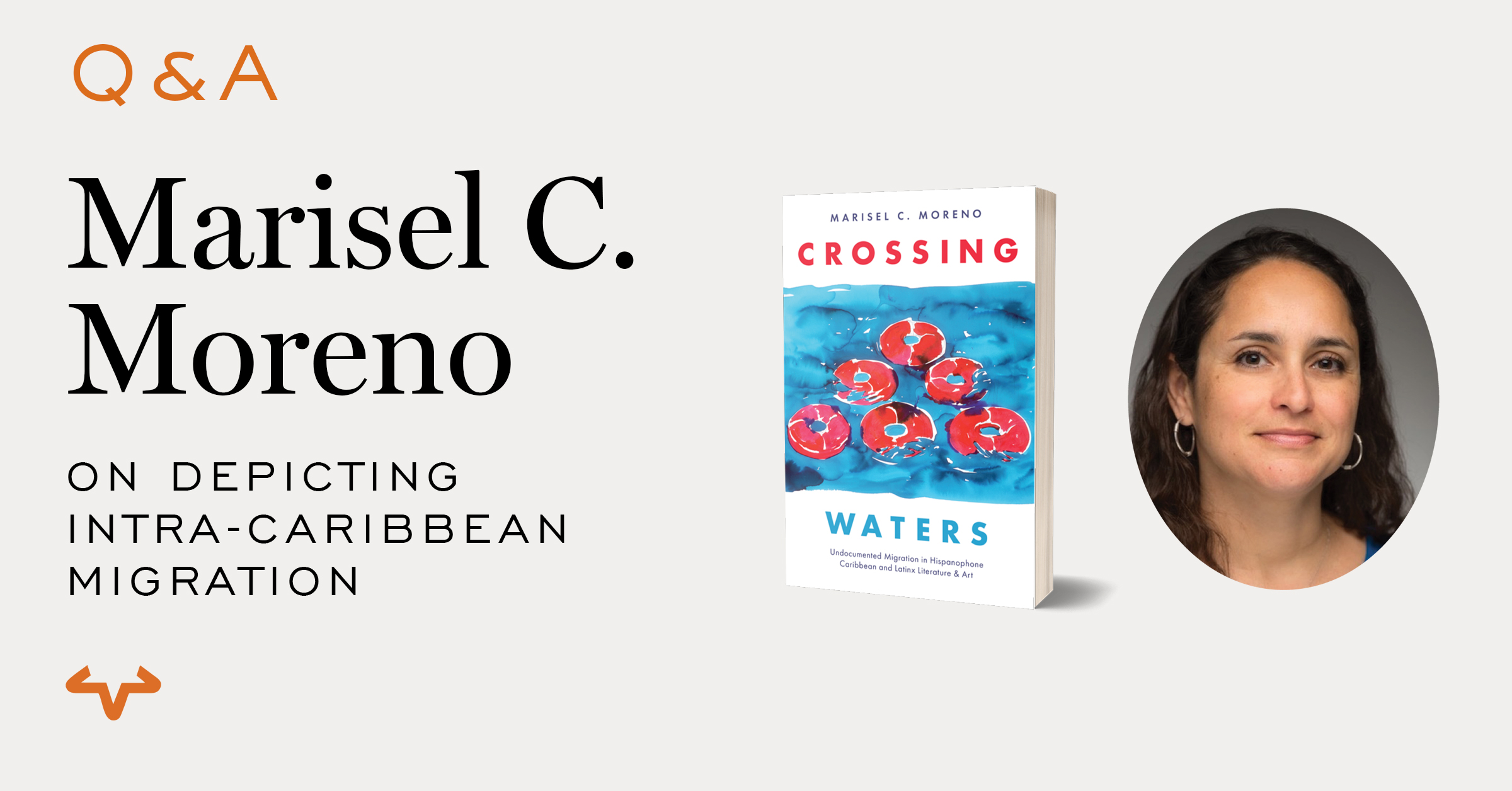 Marisel Moreno’s Crossing Waters: Undocumented Migration in Hispanophone Caribbean and Latinx Literature & Art is the first book-length study of literary and artistic representations of undocumented migration within the Hispanophone Caribbean. In this Q&A, she discusses some of the major themes of this exciting new work, including the goals of and risks involved in intra-Caribbean migration and how art and literature respond to the region’s history and push against stereotypes of Caribbean migrants.

Why is it important for your book to push back against the prominent idea of the Caribbean as a paradise?

As we know, the image of the Caribbean as a paradise is quite prevalent. When I ask my students to tell me what images come to mind when thinking of the Caribbean, most say beaches, palm trees, and vacationing. So I would say that yes, the Caribbean’s natural beauty reflects what many envision as paradise. The problem is that the fantasy that so many people construct around it—especially in the Global North—erases the reality of climate change, extreme poverty, racism, anti-Blackness, sexism, homophobia, hunger, war, and persecution that have led and continue to lead so many to attempt water crossings in order to survive. In other words, a glorified view of the Caribbean archipelago belies the effects of European-US colonialism and Empire in the region. It also ignores how the forces of capitalism and globalization affect mostly Black and Afrodescendant people, who make up the majority of undocumented migrants in the Caribbean.

Case in point: on October 17, 104 migrants—most of them Haitian—were abandoned by smugglers and stranded on Mona Island, an island that is part of the Puerto Rican archipelago and that is characterized by its inhospitable terrain. This, along with other recent interdictions at sea or apprehensions on Mona Island, reveals that undocumented migration is intensifying once again. As many of the works I examine in the book show, the mass displacement of Black and Afrodescendant people within the Caribbean is another manifestation of global anti-Blackness.

One clear way in which this manifests in some of the literary and artistic works I analyze is through the trope of the Middle Passage, which serves to symbolically connect contemporary maritime crossings to that history. As I show, a discussion of unauthorized migration in the Caribbean must center Blackness. In the end, we cannot continue to ignore the humanitarian crisis taking place in the region and I hope my book helps to bring attention to this issue.

How does centering intra-Caribbean undocumented migration, rather than migration across the U.S.-Mexico border, intervene in popular conceptions of borders and border crossings?

In the United States, the concept of the border is centered on the Mexico-U.S. border. In fact, the field of border studies developed around and has used the Mexico-U.S. border as its paradigm. When it comes to border crossings, images of migrants crossing the Río Bravo and the desert usually come to mind. Of course, this makes sense given the proximity, shared history, and magnitude of displacements across that border, which are all products of U.S. Empire, colonialism, and racial capitalism. However, there’s another region marked by the constant movement of undocumented migrants seeking to reach the United States: the Caribbean.

One of my main goals in writing Crossing Waters is to bring attention to the Caribbean as a border, and therefore, to push the boundaries of border studies. Given the level of unauthorized migration taking place within the Caribbean, it is urgent to give visibility to the region. Since border studies tend to be land-centered—and therefore fail to capture the particularities of the Caribbean—I was interested in placing the fields of border, archipelago, and island studies in conversation in order to think through how borders manifest in the Caribbean archipelago. Interestingly, despite the evident differences that exist between the land and water crossings that characterize the Mexico-U.S. and Caribbean borders, there are many similarities in terms of how unauthorized migrants experience such crossings and the risks that they face. I believe that the fields of border and migration studies would benefit from more comparative studies between these regions.

In Crossing Waters, you spend a considerable amount of time discussing Hispaniola and its unique position within intra-Caribbean migration due to the land border between Haiti and the Dominican Republic. What stereotypes about migration from Haiti to the Dominican Republic do the works you analyze push against, and how are these rooted in history?

The only land border in the Hispanophone Caribbean is the one that separates Haiti from the Dominican Republic. As the only land border in this archipelagic region, itself defined by liquid borders, it is interesting to examine how its dynamics contrast with those of other borders. While liquid borders seem less stable than land borders, it’s important to keep in mind that the Haiti-D.R. border has historically been unstable, and even fluid.

Similar to the rhetoric around unauthorized migrants that prevails in the U.S., Haitian migrants and their descendants in the D.R. tend to be looked at with suspicion and turned into societal scapegoats. In fact, for decades Dominican nationalists have decried Haitians’ presence and accused them of participating in a “silent invasion” of the D.R. Ironically, Haitians have been systematically brought to the D.R. to work as cane cutters since the U.S. occupation of 1916—1924. Since then, the Dominican government—including dictator Rafael Trujillo—and multinational sugar corporations have recruited laborers in Haiti, exploiting them and subjecting them to conditions that many have denounced as a form of modern slavery.

Many of the works I analyze challenge the negative and dehumanizing stereotypes of Haitians and Dominicans of Haitian descent, shining a light on both their history in the D.R. and the fact that they are the backbone of the Dominican economy.

I’m struck by the works of art you discuss in the book that pull from imagery associated with militarized borders and the dangers of the ocean, particularly Sandra Ramos’s Fenced by the Waters / Cercados por las aguas (1994) and Abel Barroso’s Border Patrol (2007). How are the two threats of state power and the ocean understood in contrast with each other?

Most of the works I analyze in the book reflect on the idea of the sea as a border. In some cases, the danger lies in nature itself —turbulent waters, sharks, etc.— which often impedes the migrants’ movements and claims their lives. Other times, U.S. militarization turns the sea into a border. Therefore, the bordering of the sea is a result of both nature and human intervention in the region. The interplay between these two forces is evident in Abel Barroso’s Border Patrol. The piece’s title hints at militarization and the ubiquitous presence of US Empire in the region, which deters unauthorized migration. But upon closer examination, it becomes clear that it is the sharks in the piece that function as the “border patrol.”

Sandra Ramos’s Fenced by the Waters / Cercados por las aguas focuses on the US militarization of Cuba, specifically in Guantánamo. This relatively small area is separated from the rest of Cuba by a barbed-wire fence on one side and cut off from the world by the sea—and the US Navy ships lined up along its coast—on the other side. In the end, both pieces call attention to the fact that crossing waters is a risky and potentially deadly endeavor. Whether because of threats posed by nature or the US military, the sea is more often than not an impassable border.

Marisel C. Moreno is the Rev. John A. O’Brien Associate Professor in the Department of Romance Languages and Literatures at the University of Notre Dame. She is the author of Family Matters: Puerto Rican Women Authors on the Island and the Mainland.