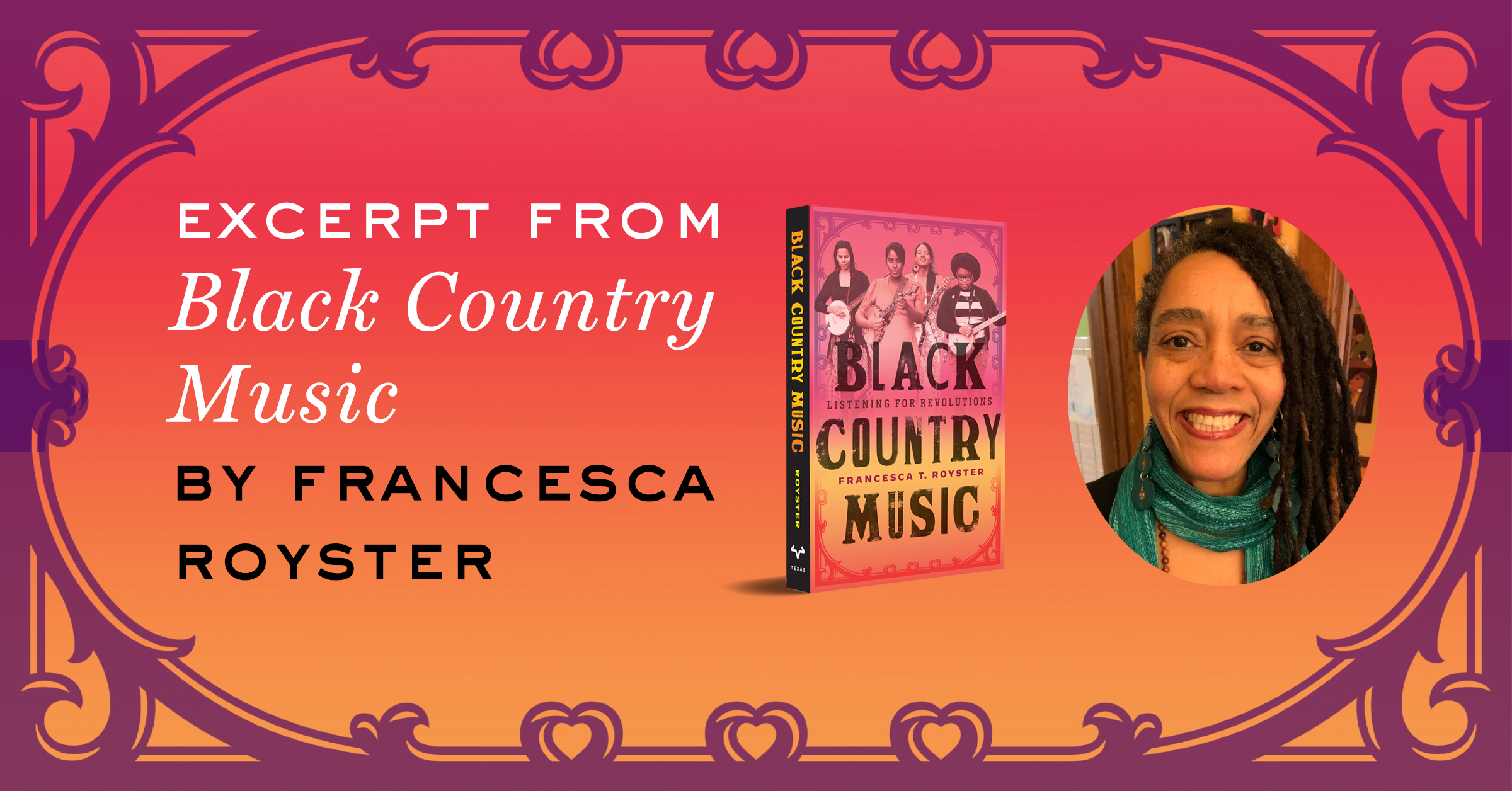 An excerpt from the introduction to Black Country Music: Listening for Revolutions

We’re thrilled that Francesca Royster will appear on NPR’s “All Things Considered” today to talk about her new book Black Country Music. You can tune in to her interview on your local NPR station around 4:50 PM CST today, or stream it online on npr.org! Below is an excerpt from Francesca Royster’s introduction to her book. Check out her book tour dates on our events page here—get signed copies at Women & Children First in Chicago on October 20th and join a virtual conversation with Daphne A. Brooks hosted by Charis Books on October 22nd!

From the Introduction—Where My People At?

“Sorry, I’m just here for the BBQ.” That’s what Black person after Black person told me when I came up to ask them what it is like to be one of the few Black people at the Windy City Smokeout, a country music and barbecue fest in Chicago’s West Loop, one Sunday afternoon in early July 2014. I located the Smokeout by the smells, of course—rich hickory and maple, crisping pork and chicken, charcoal and pepper and tomatoes—and by the sound of the bass thumping down through my chest, the sound that for me united the country rock pounding through the speakers with my own beloved genres of jazz and funk. Yet as I got closer and recognized the tune—Lynyrd Skynyrd’s 1974 anthem “Sweet Home Alabama”—my heart gave a lurch. That song has been part of a contentious conversation about the South’s legacy of racism and the role of music in perpetuating that racism, a defensive clapback to Neil Young’s critique of southern slavery and its aftermath in his 1970 song “Southern Man.” Hearing it here reminded me of all the reasons I felt wary as a Black woman entering this country music space.

To my ears, “Sweet Home Alabama” signifies the acceptance of white supremacist violence in the mainstream. The song shimmies up close to the minstrel tradition in its nostalgic evocation of “sweet songs about the Southland”; and that line “I miss Alabamy once again” gives me Al Jolson flashbacks. “Sweet Home” name-checks Birmingham’s George “Segregation Now, Segregation Forever” Wallace.1 And Lynyrd Skynyrd has performed the song on stage in front of a Confederate flag.2 For the African American vocalist Merry Clayton, who recorded background vocals for the song, “Sweet Home Alabama” evoked painful memories of racist violence: of the 1963 Birmingham church bombings that killed four little Black girls,3 and of Governor Wallace’s segregation showdown at the University of Alabama, where he famously blocked the schoolhouse door to prohibit two Black students, Vivian J. Malone and James A. Hood, from entering. In a 2013 interview, Clayton says that she and her African American singing partner, Clydie King, first refused to sing on the recording. But they rethought their performance as a kind of a protest: “We couldn’t stand on the frontlines, but we could certainly sing ‘Sweet Home Alabama’ with our heart and soul,” she says.4 And you can hear the protest in their vocals, the righteous passion of their fullthroated gospel timbre, and the controlled fury in their vibrato.5 In contrast with Ronnie Van Zant’s laid-back, good-ole-boy delivery, Clayton’s and King’s cries provide a powerful counterpoint and create a sense of layers of Alabama experiences in the song.6 As I scanned the Smokeout crowd for Black and Brown faces, Clayton and King’s righteous “Alabama-ma-maaaaaaa!” in my ears, I thought both of the contentious history that surrounds country music and of the power to reclaim and transform it.

The questions that I wanted to ask the scattered Black people that I saw—“Why do you like country music? Why are you here?”—were ones that I was also reflecting on for myself. Since I’d decided to lean into country music and to write a book about it, I was growing to love Black and Brown country music’s ability to capture difficult and complex stories in their lyrics and sounds, sometimes by hiding in plain sight. I found myself drawn to resourceful stories of making do and sometimes failing, like the Black and Brown sounds of country-soul crooner Freddy Fender’s “Before the Next Teardrop Falls.”7 I found something familiar in the gritty texture of experience in the voices of my favorites, like Tina Turner’s cover of “Help Me Make It Through the Night” and Linda Martell’s hurts-so-good yodel on “Bad Case of the Blues.” I loved the stories of family survival and loss that I hear in the Carolina Chocolate Drops’ “Leaving Eden.” And in Valerie June’s crackle-voiced, contrary, slowed-down waltz in “Tennessee Time,” I heard a reclamation of country speed and somatic experience in the face of northern migration. This was country music that you wouldn’t necessarily hear on stage at the Grand Ole Opry or on Country Music Television, though lately it’s been getting more attention from these venues. Some of these musicians wouldn’t even call their music “country music,” though they are in conversation with country as a genre. This music shares common aesthetics with country music, together with soul, gospel, blues, and rhythm and blues.

But when I first arrived at the Smokeout, I was so nervous that I sat in the car for several minutes before going in. It was my first country music fest, and I wasn’t sure what or whom I’d encounter. The lineup was of all white musicians, with the exception of Chase Rice’s multiracial backing band. Walking to the entrance, I hesitated as images of all-white crowds waving Confederate flags, hopped up on Coors and loose-meat sandwiches, two-stepped though my brain.

The Black security guard, a young man about the age of one of my college students, took my ticket and gave me a curious look, then averted his eyes, a smile playing on his lips. He and the other guard, also Black, snickered and shook their heads as I passed, and suddenly I was back in the seventh grade, awkwardly attempting the dance of the moment, “The Spank,” at the end-of-year dance, the line of boys along the wall assessing my rhythm and not-quite funky hips. Already, I felt that old shame of not being quite “Black” enough, the old ear-burning feeling of being watched and measured by men, one of the first feelings that I had in my body that told me that I was queer.

The crowd near the main stage was mostly white and mostly young, in couples and in small groups. They wore a mixture of styles, though cowboy boots were worn by many folks, in spite of the heat. I saw a sprinkling of Black spectators and felt some relief. But each person that I approached was polite, but firm. “Sorry, I can’t help you. I don’t really like country music,” the relaxed Black woman sitting alone at a picnic bench told me, giving me a warm smile. She was dressed in a white skirt and blouse and strappy sandals with medium heels. Perhaps she had come over from church. She watched the crowd over her sunglasses and ate her chicken wings. “Sorry, I don’t know a thing about country music,” said the muscular Black man with a carefully shaved goatee. He was with an older beefy white man in a golf shirt who glared at me as if I were picking a fight.

Was it possible that everyone was just tolerating the music to get at the food—a small, albeit tasty selection of BBQ vendors from around the city? It’s true that as I pulled up to the Fest, I saw a group of three African American men leaving the site with comically huge bags of barbeque, but they carried themselves with the weary, satisfied air of folks just getting off work. Maybe they were part of the preparation crew for the festival, getting things ready for the crowd. They rolled down the windows of their gray, beaten-up Honda, blasting hip-hop as they left.

Since Chicago is a place where you can easily find cheap, delicious barbeque in many neighborhoods in the city, and the admission to the festival was forty dollars a pop, I find it difficult to believe that the people I talked to would only come for the food. Maybe I was interrupting their groove, the chance to sit outside on a hot, sunny day—one of the few in this unseasonably wet, gray summer—and enjoy their “Q” without interruption.

Or maybe I was asking a fundamentally uncomfortable question, bringing to light an awkwardness that most of us, as we navigate white spaces, might try to ignore or suppress in order to enjoy ourselves.

Francesca T. Royster is a professor of English at DePaul University, author of Sounding Like a No-No: Queer Sounds and Eccentric Acts in the Post-Soul Era and Becoming Cleopatra: The Shifting Image of an Icon, and coeditor of “Uncharted Country,” a special issue of the Journal of Popular Music Studies on race and country music.