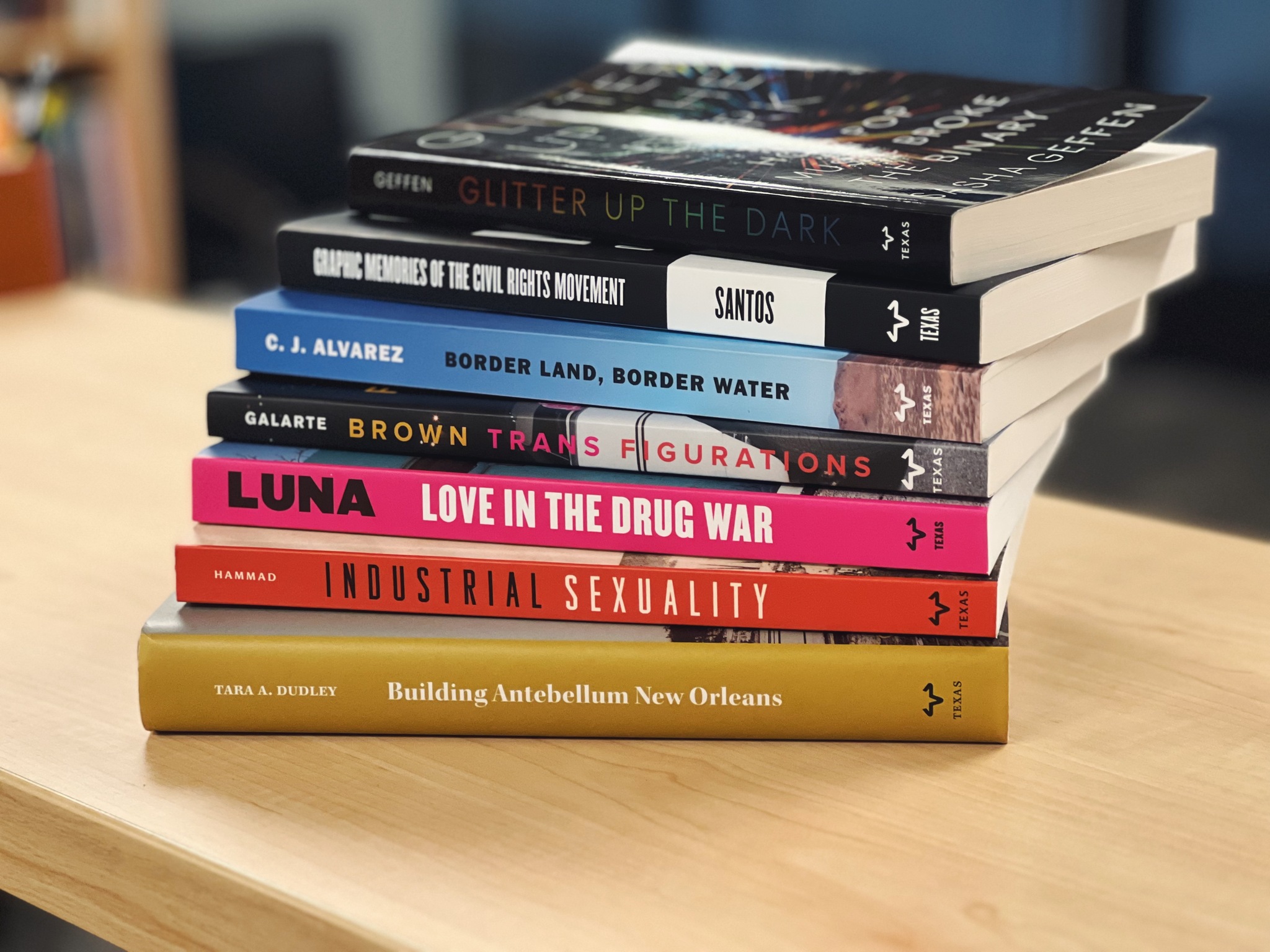 This year, during the 40 hours for the 40 acres fundraising campaign, UT Press is raising money to help first-time authors with publishing expenses. These can range from the licensing of illustrations, to the creation of an index and other key parts of a book. As first-time authors typically have access to fewer institutional resources of support, they often have to pay these expenses out-of-pocket.

As a publisher, UT Press offers assistance by raising funds that are set aside to help early career scholars get their first works published. By supporting the scholars who write books and journal articles, your generosity helps the University of Texas Press reach a broad audience of readers and researchers around the world.

As part of this campaign, our team wants to spotlight a few of the first-time authors whose books have garnered academic and popular recognition, celebrating them and looking forward to the big ideas first-time authors will contribute in the future. All of the selected books are award winners and are available for sale on our website.

To learn more, or make contributions to the first-time author’s fund, visit our donation page.

Love in the Drug War scrutinizes not only la zona (a regulated prostitution zone in the city of Reynosa, across the border from Hidalgo, Texas) and the people who work to survive there, but also Reynosa itself—including the influences of the United States—adding nuance and new understanding to the current Mexico-US border crisis.

During the years 2008 and 2009, a time of intense drug violence, author Sarah Luna met and built relationships with two kinds of migrants, women who moved from rural Mexico to Reynosa to become sex workers and American missionaries who moved from the United States to forge a fellowship with those workers. Luna examines the entanglements, both intimate and financial, that define their lives. Using the concept of obligar, she delves into the connections that tie sex workers to their families, their clients, their pimps, the missionaries, and the drug dealers—and to the guilt, power, and comfort of faith.

Sasha Geffen’s first book, Glitter Up the Dark traces the history of gender fluidity in pop music from the early twentieth century to the present day. In it, the author explores music’s intrinsic quality of subliminal expression, which, through paradox and contradiction, allows rigid gender roles to fall away in a sensual and ambiguous exchange between performer and listener. The book received lots of media attention and was listed among Kirkus/Rolling Stone’s “Best Music Books of 2020” and Pitchfork’s “Our 15 Favorite Music Books of 2020,” where it was called “an essential contribution to the modern music-book canon, made all the more intimate in Geffen’s hands.”

Industrial Sexuality: Gender, Urbanization, and Social Transformation in Egypt by Hanan Hammad won 3 awards, including the 2017 Sara A. Whaley Book Prize from the National Women’s Studies Association, and the AMEWS Book Award of the Journal of Middle Eastern Studies, 2017. The book also received 2 additional honorable mentions.

In her book, first-time author Hammad focuses on the millions of Egyptian men, women, and children who first experienced industrial work, urban life, and the transition from peasant-based and handcraft cultures to factory organization and hierarchy in the years between the two world wars.

Their struggles to live in new places, inhabit new customs, and establish and abide by new urban norms and moral and gender orders underlie the book’s story of the making of modern urban life—a story that has not been previously told from the perspective of Egypt’s working class.

Graphic Memories of the Civil Rights Movement: Reframing History in Comics by author Jorge Santos Jr., won the prestigious Charles Hatfield Book Prize of the Comic Studies Society in 2020 and was listed as a CHOICE Outstanding Academic Title in 2019.

The book showcases five vivid examples of the potential of graphic novels and graphic memoirs to push against the dominant historical narratives of the American Civil Rights Movement. Jorge Santos also explores how this medium allows readers to participate in collective memory making, and what the books reveal about the process by which history is (re)told, (re)produced, and (re)narrativized.

Brown Trans Figurations: Rethinking Race, Gender, and Sexuality in Chicanx/Latinx Studies by Francisco J. Galarte advances “brown trans figuration” as a theoretical framework to describe how transness and brownness coexist within the larger queer, trans, and Latinx historical experiences. He recenters brown transgender narratives that are frequently silenced and erased.

Galarte examines the violent deaths of two transgender Latinas and the corresponding narratives that emerged about their lives, analyzes the invisibility of brown transmasculinity in Chicana feminist works, and explores how issues such as transgender politics can be imagined as part of Chicanx and Latinx political movements. This book considers the contexts in which brown trans narratives appear, how they circulate, and how they are reproduced in politics, sexual cultures, and racialized economies.

In Building Antebellum New Orleans: Free People of Color and Their Influence, Tara A. Dudley examines the architectural activities and influence of gens de couleur libres—free people of color—in a city where the mixed-race descendants of whites and other free Blacks could own property.

With deep archival research, Dudley recreates in fine detail the material culture, business and social history, and politics of the built environment for free people of color and adds new, revelatory information to the canon on New Orleans architecture.

Dudley’s first book was highly praised, and received multiple awards, including the 2022 PROSE Award Winner in Architecture and Urban Planning, The Center for History and Culture of Southeast Texas and the Upper Gulf Coast 2022 Summerlee Book Prize in Nonfiction, and the Southeast Chapter of the Society of Architectural Historians (SESAH) 2022 Summerlee Best Book Prize.

Alvarez is the author of Border Land, Border Water: A History of Construction on the US-Mexico Divide, which examines the history of the construction projects that have shaped the region where the United States and Mexico meet. Tracing the accretion of ports of entry, boundary markers, transportation networks, fences and barriers, surveillance infrastructure, and dams and other river engineering projects, C. J. Alvarez advances a broad chronological narrative that captures the full life cycle of border building.

The book went on to win multiple prizes, including the 2020 Abbott Lowell Cummings Award of the Vernacular Architecture Forum and the 2021 Elisabeth Blair MacDougall Book Award of the Society of Architectural Historians.

In the video below, Alvarez discusses the reception of his first book, and how it led him to connect with collaborators in other disciplines.