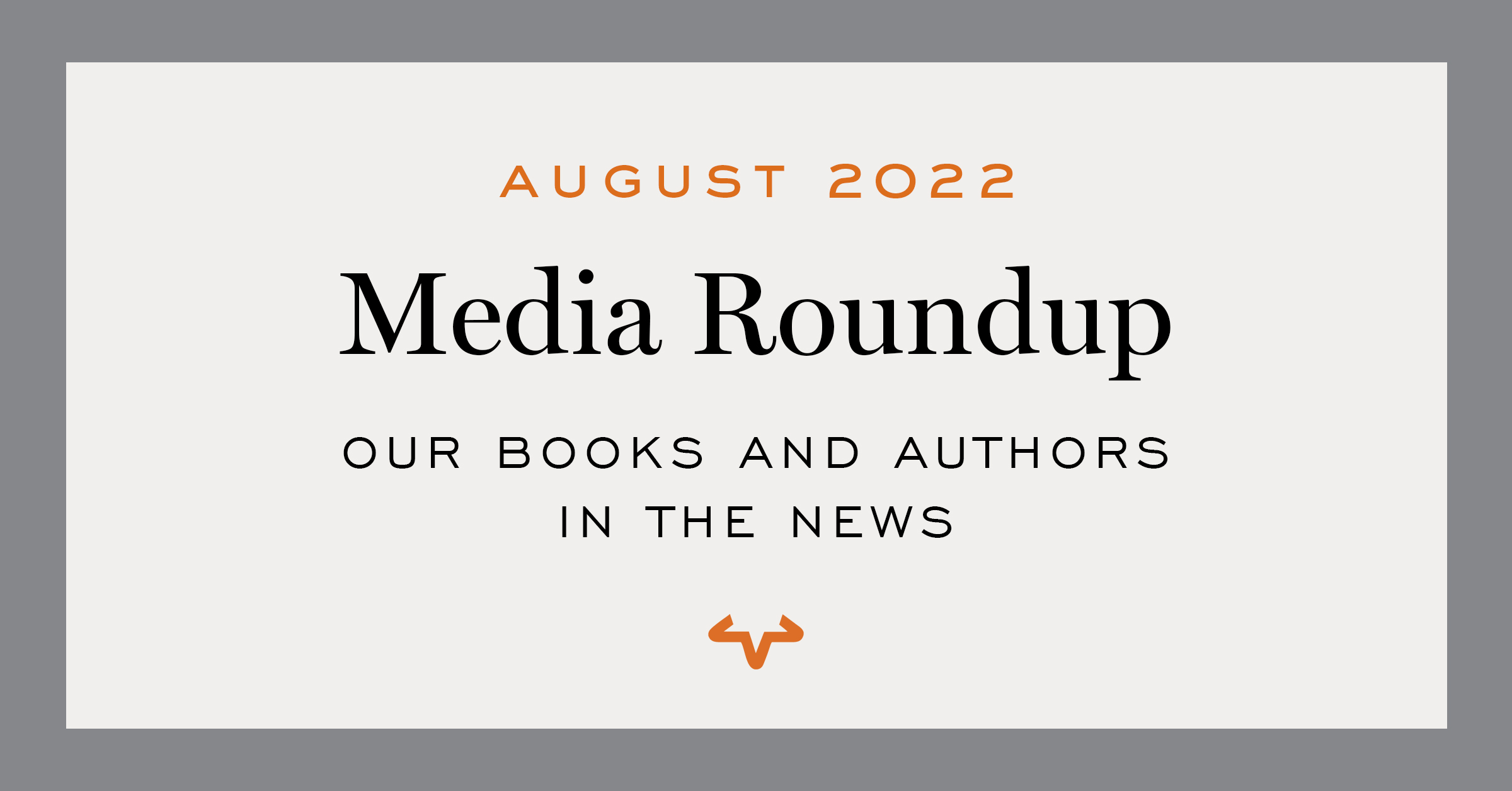 Every week, our wonderful publicity team follows the cross-platform media coverage our authors and their books receive. We’re proud to share this week’s highlights below with links to where you can read more about these great titles!

Kicking off this week’s roundup is music, which got a lot of love this week. Texas was another popular subject this week, with special attention to our Texas art and architecture and photography titles. Here’s the latest from the news wires and beyond! Enjoy.

Margo Price’s new single and music video dropped this week, and pieces on them all over the web mentioned Maybe We’ll Make It, including at Pitchfork, The Tennessean, Consequence of Sound, and elsewhere. Price was also interviewed on Southern Living’s “Biscuits & Jam” podcast.

DJ Screw was included in “A look at hip hop books of 2022” at the New York Amsterdam News. Jordannah Elizabeth writes, “Walker does scrupulous research in the form of a broad span of interviews with nearly everyone who knew the seminal Houston DJ.” Elizabeth also mentions Houston Rap Tapes in the piece.

Why Lhasa de Sela Matters was reviewed at Boing Boing. A. E. Gómez writes, “Why Lhasa de Sela Matters. . . is an intimate portrait of the creativity that resulted from the collision of a hopeful and hopeless romantic. Goodman narrates the challenges and possibilities of living a nomadic life, and how those challenges and possibilities impacted Lhasa as an artist, a sister, a daughter, a partner, and a loving human being.”

Fangirls was reviewed at The Emory Wheel. Miranda Wilson writes, “This book felt like a therapy session to heal my inner preteen,” going on, “[Fangirls] is. . .an enlightening ode to the teenage experience and fan culture. As Ewens’s dedication suggests, I recommend it to anyone who has ever found solace in an obsession.”

Revenge of the She-Punks was mentioned in a piece on a new compilation inspired by the book at Louder Than War.

Lacy M. Johnson, editor of More City Than Water, wrote a piece for the Houston Chronicle on the fifth anniversary of Hurricane Harvey titled, “So little changed after Harvey. Can we call what happens next a disaster?” Johnson and Beckett were also interviewed this week about their book at the Kinder Institute’s “Urban Edge,” and an interview from the book between Johnson and epidemiologist Grace Tee Lewis was adapted and published at One Breath Houston.

David Shields, author of The Rob Roy Kelly American Wood Type Collection, was interviewed about his book at PRINT. Steven Heller introduces the book as being “406 pages of the most comprehensive biography and scholarship on Kelly and his collection,” going on, “[Shields’s] exhaustive attention to detailing the types and their makers and the eloquent reverence he displays for Rob Roy Kelly is far more valuable than the curiously inexpensive cover price.” He calls the book “An impeccable volume.”

Improbable Metropolis was reviewed in Buildings & Landscapes: Journal of the Vernacular Architecture Forum. Fellow UTP author Kathryn E. Holliday writes, “Bradley has spent a lifetime dedicated to architecture, planning, and historic preservation in Houston and her encyclopedic knowledge of the city makes this ambitious work possible. The text is richly accompanied by a wealth of color maps and photographs that increase the depth of documentation.” Holliday goes on, “Improbable Metropolis provides further argument that Houston should not be treated as a regional subject, but one that reflects the central importance of private capital, rather than public planning, in shaping the modern American city.”

A Texas Highways remembrance of Coach Gary Gaines, who passed away this week, includes mention of Friday Night Lives and uses Robert Clark’s photos of Gaines.

Making The Best Years of Our Lives was reviewed at the Classic Movie Man blog. Stephen Reginald writes, “Macor has done scrupulous research in putting the pieces together on how The Best Years of Our Lives came to be. From its beginning as an idea to its casting, everything you ever wanted to know about the making of this beloved classic is in Macor’s book.” Macor’s book was also mentioned in a piece on the film published this week at the Shepherd Express.

Julie Turnock, author of The Empire of Effects, was interviewed about her book for the New Books in Film channel of the New Books Network.

Below the Stars was reviewed in the Journal of Cinema and Media Studies, alongside Virginia Wright Wexman’s Hollywood’s Artists. Peter Labuza writes, “[Below the Stars demonstrates] how media studies scholars should theorize and teach labor organizing and media industry structures,” going on, “Fortmueller’s archival research demonstrates a keen ability to find Hollywood workers often missing from other archival collections. But in her final chapter, interviews with working actors provide a striking look at the precarity of employment that defines our contemporary media moment.”

Quinceañera Style was mentioned in a piece at the Champaign News-Gazette on a new exhibit at the Spurlock Museum celebrating quinceañeras.

The Politics of Patronage was reviewed in the Western Historical Review. Angelina T. Martinez writes, “The Politics of Patronage is a groundbreaking source for scholars of Mexican American civil rights and legal history,” concluding, “Marquez’s book successfully inserts MALDEF into the historical canon alongside other important civil rights groups of the twentieth century, where it rightfully belongs.”

¡Viva George! was reviewed in the Journal of American Folklore, also by a fellow UTP author, Norma E. Cantú. Cantú writes, “[¡Viva George!] presents a strong case for an interdisciplinary approach in folkloristics—one that also debunks artificial genre borders as well,” going on, “¡Viva George! demonstrates how the study of festivals and celebrations in the field of folklore studies has gone beyond the merely descriptive to serious analysis and theorizing. . .I would highly recommend the book for use in classes on ritual or popular cultural festivals, especially at the graduate level.”

Electrifying Mexico was reviewed in Planning Perspectives. S. Yohad Zacarías writes, “Electrifying Mexico is an essential book for all students of the history of urban technologies,” going on, “Electrifying Mexico provides an original contribution to the field by offering a far more complex history of electricity than had existed in previous studies, focusing on the urban cultural history of human imaginations around technology and the intangibility of electrical energy.” Zacarías concludes, “This engaging book makes a remarkable contribution to the historiography of studying electricity in urban space from the material and symbolic point of view in Mexico, Latin America, and other geographical areas.”

José R. Ralat, author of American Tacos, was interviewed, and his book mentioned, in a piece at the Washington Post titled, “Everyone’s favorite airport restaurant lives in O’Hare.”

Well, that was lovely. Same thing, this time next week? Until then, we hope y’all have a great week.