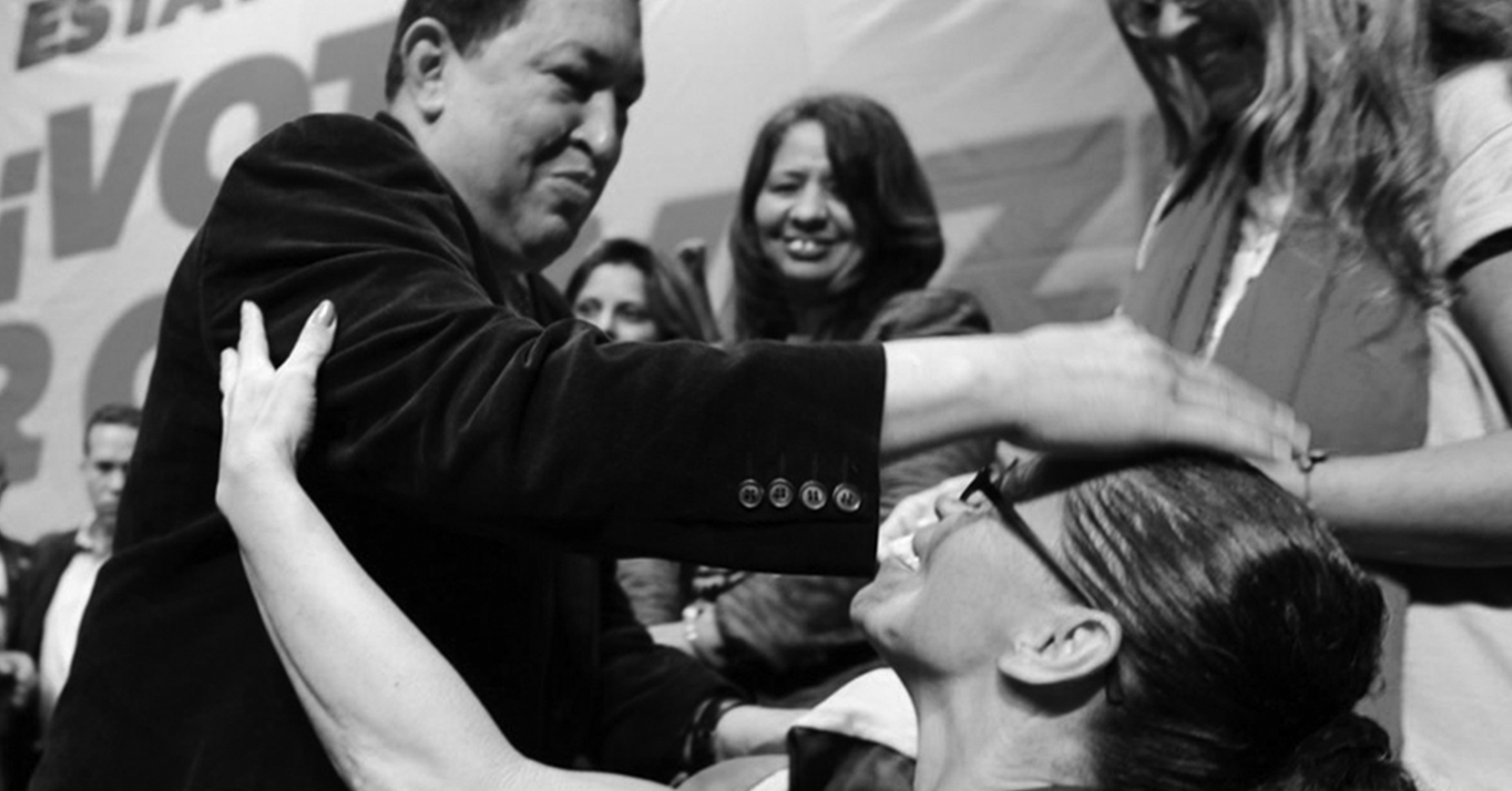 Rachel Elfenbein’s Engendering Revolution: Women, Unpaid Labor, and Maternalism in Bolivarian Venezuela is the first in-depth study of the overlooked yet pivotal role played by poor and working-class women’s unpaid labor, maternal gender role, and organization in propelling and sustaining Venezuela’s Bolivarian revolution. It demonstrates that the Bolivarian revolution during Chávez’s presidency cannot be understood without comprehending the gendered nature of its state-society relations.

We asked Dr. Elfenbein a few questions about her book. Engendering Revolution is out now.

Describe your research and the resulting book.

In 1999, Venezuela became the first country in the world to constitutionally recognize the socioeconomic value of housework and enshrine homemakers’ social security. This landmark constitutional provision formed part of the larger Bolivarian state transformation project aiming to construct a new social contract between the state and society by expanding poor and working class—or popular-sector—participation and inclusion. This new social contract privileged popular participation in community service delivery and political mobilization. Because of their primary responsibility for household and community care work, popular women became key to this contract. The Bolivarian government recognized their centrality, asserting that the revolution had “a woman’s face.” In other words, the government was aware that there was no revolution without popular women’s participation.

My book brings to light a crucial tension at the heart of the Bolivarian revolution during Hugo Chávez’s presidency: state recognition of the centrality of poor and working-class women’s unpaid labor and maternal gender role to the revolutionary process rendered them vulnerable to state appropriation. To paraphrase one feminist activist, the state wanted popular women’s work, but not their power.

My book shows that during Chávez’s tenure, the Bolivarian state forestalled initiatives to legislate homemakers’ social security, and many homemakers could not access it. I contend that popular women performed much of the unpaid social and political labor necessary to build and sustain the revolution, even as many of them remained socially, economically, and politically vulnerable.

My argument is developed by combining field research on three understudied areas of Bolivarian Venezuela: 1) the legal codification of women’s labor rights; 2) political mobilization around those rights; and 3) the lived experiences of women in the popular sectors. It is built from one and a half years of qualitative research with popular women, feminist analysts and organizations, social security analysts, state archives, and state women’s leaders and institutions in different geographic regions of Venezuela.

How did you get interested in the subject of your book?

My interest in this subject began far from Venezuela, when I was living and doing work around gender violence, labor, HIV/AIDS, and public health in southern Africa. I witnessed how poor and working-class women’s unpaid labor was vital to household and community survival in the face of structural unemployment, the HIV/AIDS and tuberculosis pandemics, and neoliberal state restructuring. In community after community, many poor women were organizing and doing so much of the necessary care work that held communities together. Yet a lot of that work went unrecognized and unpaid, and left the workers who carried it out themselves vulnerable to poverty, disease, and gender violence. I became interested in institutional mechanisms to recognize such work and socially protect the workers who carry it out as a means to mitigate their vulnerability. And that is when I heard of Article 88 in Venezuela’s 1999 Constitution, which recognized the value of unpaid housework for society and entitled homemakers to social security. I wanted to find out what Article 88 meant for the poor and working-class women in Venezuela largely carrying out unpaid labor.

How was the Bolivarian government able to leverage poor and working class women’s political participation during Chávez’s presidency?

The Bolivarian government’s approach to poor and working-class women’s political participation was not uniform. That said, the government was populated by leaders who knew that popular women, their labor, and their organization by and large sustained the revolution. The government knew that women voted more than men, that women mobilized politically at grassroots levels more than men, and that women organized more than men to meet community welfare needs. As government officials often asserted, “the revolution ha[d] a woman’s face.” Because of this awareness, the Bolivarian government progressively created a range of popular women’s organizations through which it incorporated thousands of women across Venezuela into the revolutionary process. Many of these new state-directed women’s organizations provided social and economic assistance to popular women and their families as well as opportunities to engage with the state, other women, and their communities in new ways. Yet these new organizations rendered popular women’s unpaid labor and organizing vulnerable to clientelistic use by the state. Popular women were more vulnerable to state authorities’ political direction and manipulation when they depended on the state for resources, like cash transfers, because the state could more easily control them, their organization, and their mobilization. It’s important to note that these clientelistic exchanges were not about traditional vote buying, as most popular women already supported the Bolivarian government. This was their process, a process that they helped to build and in which they saw themselves represented by Chávez and the revolution more broadly. Rather, the clientelistic exchanges were for popular women’s continuous political organization in support of the Bolivarian government and its interests.

At the same time, the broader political context of intense and constant political polarization hampered popular women’s organizing for their own rights and power. Many popular women—whether or not they were in state-led organizations—felt that they must unify to defend the government in the face of ongoing domestic and international opposition threats.

Describe the broad tenets of the Latin American Left’s promotion of popular power and social justice.

The Left came to national power in the majority of Latin America at the beginning of this century by recognizing popular and social movement demands to redress long-standing inequalities exacerbated by neoliberalism. The institutional Latin American Left did not promote a unified social justice program throughout the region; it varied nationally and sub-nationally. However, across the region, the Left prioritized redressing inequalities by reversing (some) neoliberal policies and reintroducing states’ progressive interventionist roles in markets and societies. Central to such interventions were expanded social spending and social protection programs. Yet the Left largely relied on a sustained primary commodity boom, and extractive industries in particular, to finance its pro-poor policies. And it largely relied on poor women’s unpaid labor to sustain its expanded social policies, which my book underscores in the case of Bolivarian Venezuela. This is why in Venezuela during Chávez’s tenure, poverty was massively reduced but the gendered burden of poverty did not change: women continued to bear it disproportionately. In other words, Bolivarian Venezuela’s and much of the Latin American Left’s reliance on natural resource extraction enabled large-scale social redistribution, yet Venezuela and most of the Latin American Left did not commit to large-scale social redistribution of reproductive labor.

The institutional Latin American Left also sought to politically incorporate groups historically excluded from liberal democratic institutions and constitution- and policy-making processes, such as the popular sectors, women, and indigenous peoples. A number of countries governed by the Left, such as Bolivia, Ecuador, and Venezuela, rewrote their constitutions, enshrining new rights for previously excluded social groups, such as homemakers’ right to social security in Venezuela. In most countries governed by the Left, redressing political inequalities included the creation of new institutions for participatory democracy. In Bolivarian Venezuela, the government instituted a number of new participatory democratic mechanisms in order to promote popular power.

What context might be missing from current coverage of Venezuela’s instability and how might that affect women and families?

Broadly speaking, current coverage in the Global North of Venezuela’s crisis tends not to situate it within the broader geopolitical and historical context shaping it. Specifically, much coverage of the Venezuelan crisis tends not to note how US sanctions and a US-led oil embargo have crippled the Venezuelan economy. Venezuela historically has been, and remains, heavily reliant on the oil industry for foreign currency. The Bolivarian government inherited an extractive economy, and despite its aspirations and initiatives to sustainably diversify the economy, Venezuela has remained a petro-state, heavily dependent on importation of essential goods. The Bolivarian government renationalized the oil industry, and has since used oil revenues to fund basic public services—like healthcare, housing, and subsidized food—for many people and communities throughout Venezuela. Currently, with very limited public oil revenues, the Bolivarian government is struggling to guarantee basic welfare. This is not to deny the domestic factors shaping the economic, social, and political crisis in Venezuela; rather, it is to highlight that the US-led intervention has severely compounded the mutually reinforcing crises in the country.

The current coverage of Venezuela’s crisis has rightly highlighted how it has been devastating for poor and working people in Venezuela. Yet it has largely ignored how the crisis itself is gendered; that is, how it affects poor and working-class people differently based on their gender and their positioning within the gendered division of labor. Research from past crises in Venezuela and many other countries has shown how poor women tend to bear much of the burden, because of the gendered division of labor, gender inequalities in the public and private spheres, and gender roles that charge them with the bulk of household reproduction responsibilities. In times of crisis, poor women tend to have to do more work with fewer resources in order to ensure their households’ survival. My book reveals that the Bolivarian revolution during Chávez’s tenure did not transform the gendered division of labor; it reinforced it, and in many cases, deepened it. The revolution preserved the normative underpinning of maternal altruism, while resignifying it as revolutionary. Because of the lack of transformation of the gendered division of labor in Venezuela, poor women, their maternal gender role, and their unpaid labor continue to be essential to ensuring households’ and communities’ subsistence during this crisis, especially as the state is no longer capable of meeting many welfare needs. And much of this labor that is so crucial to weathering the crisis remains invisible.

An independent scholar, Rachel Elfenbein holds a PhD in sociology from Simon Fraser University and was a Fulbright scholar to Venezuela. She was awarded the Latin American Studies Association’s 2018 Helen Safa Award for the research featured in Engendering Revolution. She works as an educator, researcher, facilitator, and counselor with civil society organizations in North America and southern Africa.